No, not a massive sale but me chucking stuff out.  Sometimes this rebounds.  No sooner had the bag of old carpet tiles hit the skip than we found the black mould in the bathroom had entirely permeated the carpet.  If only these two events had occurred in a different order.

What I am really clearing are these. 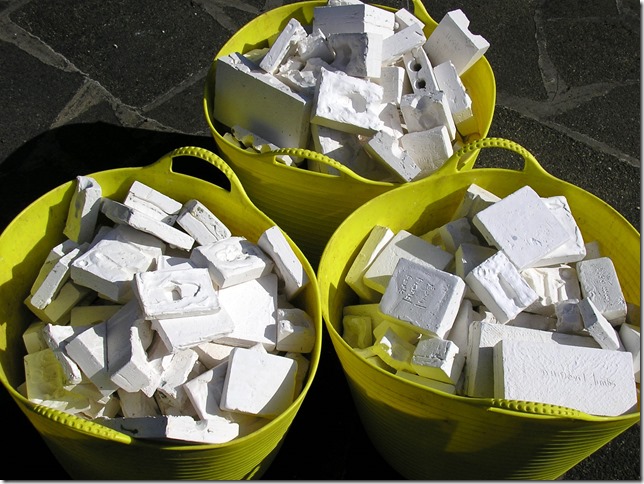 Yes I am throwing away moulds again, including the very first commercial moulds that I imported, at the cost of an arm and a leg (and a head and torso) before I even had a kiln.  Now that’s ambition.  I used to part the two halves to stare long and hard at the shapes and wonder what they would look like when cast.  Once I bought the kiln I was skint for evermore and couldn’t afford any more moulds.  So I started making them.

I am cleaning and clearing and vacuuming as I go and for lo!  The garage floor!

The old plaster moulds go to the dump as hardcore.  A collector remarked that it would be a good house built on dolls.  Yes it would.  The old moulds make way for new, better moulds which I am keen to get on with.  I have received a small parcel of 24th scale furniture from America, lovely despite the wincing import duties.  It has been such a pleasure collecting the furniture for the new house.  The Bespaq and JBM furniture in half scale has really come on in leaps and bounds since I last looked at imported furniture for an article I was writing for a paper magazine ten years ago or so.  In the interval, skills have been acquired, especially in the matter of carving.  Some of the most virtuoso carved furniture I am sure is done just to prove they can do it, I would love to interview the Chinese carvers who are making the small stuff.  Much of it is not appropriate to my time frame, which is Regency and very classical and restrained.  Irritatingly, though both these manufacturers make Regency furniture in twelfth scale, neither do it in 24th yet.  I do have a behind-the-sofa 24th scale kit which I may just make and fill with the twiddly furniture.  It was going to be a teddy bear hotel (obviously) but I might do an up-market spa or boutique hotel.  The building is Victorian style with a turret.  I could do the Gothic fantasy I always intended for the Beacon Hill (the kit of which I could never afford, each time I saved close to the price, reality intervened.)  That would be interesting because the Regency house I am planning is Regency Gothick, mainly for the windows.  Then I could have Gothick and Gothic, which really are two different architectural styles separated by some years, the first, fairly restrained, gave impetus to the second which had no restraint of any kind whatsoever to it, in much the same way as the Sixties didn’t happen until the Seventies.

Must go.  Moulds to chuck, dumps to visit, things to throw away!

This entry was posted in 24th scale and tagged throwing away moulds. Bookmark the permalink.