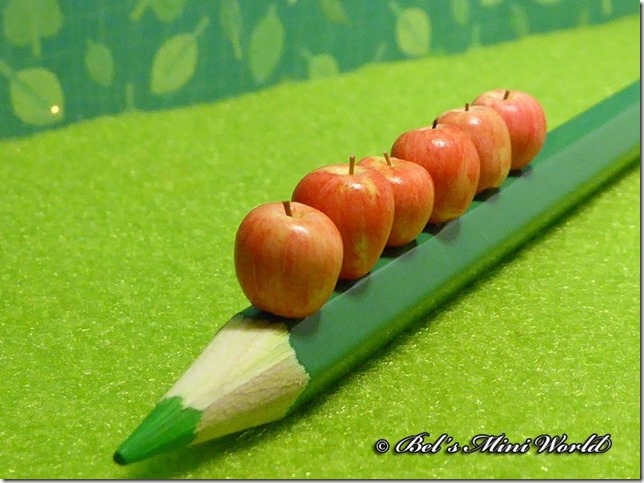 How do you like them apples?  I think they’re great.  This is a new exhibitor at Miniatura: Bel’s Mini World.

One of the features I really enjoy about Miniatura is that there are always new exhibitors and, because it’s Miniatura and there is a rigorous entry process, they are always good exhibitors.

Years ago when I used to write for paper magazines, I discovered that some of the new exhibitors were sometimes very disappointed.  Having got their expectations up after being invited to exhibit at such a prestigious show, sometimes visitors missed them in the rush to see all the familiar friends and artists that were already there.  I started trying to interview all the new people every show, so that at least they got a mention in a magazine and didn’t feel so left out.  In the days when the hobby and the show was expanding rapidly there were often a lot of new exhibitors, once I interviewed 27 new artists in one weekend, many of them in languages I did not speak, whilst simultaneously running my own stand.  Interviewing them meant just that, often waiting till they had a lull in sales to chat and then taking some of their work to the photography studio to be photographed and collecting it after it had been done and returning it to the correct stand.

Dearly beloved Joyce Dean, magazine editor, followed me round one show.  I said: Joyce, are you following me round?  She replied:  Yes, we were all having bets as to how you managed to do it.  But I can see how you do it now.  You run.

Dear reader, I did.  Sometimes it took three days after a show for the soles of my feet to go flat again, they used to be so swollen.  I had relative youth on my side, slightly.  The work generated kept me writing for whichever magazine it was for six months until the next show.  I also interviewed regular exhibitors too, though I never managed to get to everybody, there were just too many.

Then artists began to say that it was lovely to be in a magazine but it was, unfortunately, after the show.  What would be helpful was some way of telling visitors what to look for before the show.  Simultaneously visitors used to complain that if they had only known the artist had been going to take the miniature depicted in the magazine to the show, they would have gone and had a good look before some other collector bought it and spirited it away to be part of their collection never publicly to see the light of day again.

So I thought and then I cogitated and I wondered.  Oh if only there were some free access media system where an artist could send me details of their work before the show and I could show everyone…………….

And the rest, as they say, is history. 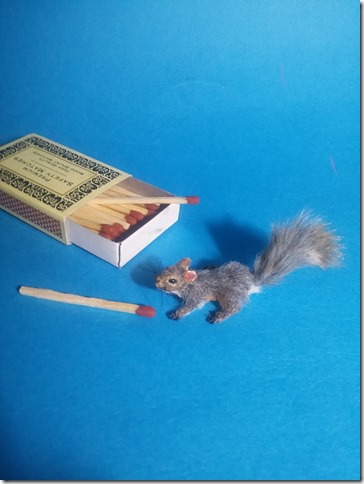 EH miniatures’ squirrel will also be seen for the first time at Miniatura, it will probably have eaten all the matches by then.

There is much to look forward to, stay tuned for the next fortnight.  There will be frequent updates because it’s Miniatura and it’s great!

This entry was posted in Miniatura and tagged Miniatura at the NEC. Bookmark the permalink.