I am always happy to answer emails, in fact I’m utterly thrilled you bother to write.  Thank you if you do.  I got a lovely email asking how I could look at a doll I’d made and decide it was a haberdasher.  You may remember

the haberdasher is second from the left.

Well I wouldn’t if I did, though sometimes I have in the past.  These days I’m such a clever clogs I deliberately set out to make a haberdasher and also a short fat witch, a fairy lady and so on.  You may wonder why I would do such a thing, though not if you had been to Miniatura and seen my stand.  On the end there is always a hard backed notebook and a pen.  One page has a printed heading ‘please write which dolls you would like me to make in 24th scale and the page next to it has a heading the same for 48th scale.  Long ago I realised that the longest lasting miniature businesses  do what their customers want them to do.  It’s not like choosing which gas provider you’ll have, because no one is obliged to have a dolls’ house and anyone can choose whatever they would like to have in a dolls’ house.  I should jolly well know, as I am the person who wrote impassioned articles in a number of paper magazines for over twenty years defending the right of readers to have whatsoever they pleased in their dolls houses.

It all began nearly thirty years ago when someone wrote a letter to a magazine.  The miniaturist in question had put a teddy bear in a nursery that predated the invention of teddy bears and had been criticised for doing so by a very picky relative.  There followed a flurry of correspondence in which history savvy readers pointed out that there had been toy bears that predated Teddy Roosevelt refusing to shoot a small bear.  History purists defended the critical relative and gave  the miniaturist both barrels in the way that president Teddy had not and then there was another deluge of letters saying things such as: we have a TV in an 1890s house ner ner nee ner ner, and: I have a friend with a punk rock doll in a 1950s house – she should be shot at dawn; everything in my house is exactly dated to half past ten on the morning of June 4th, etcetera and so forth.  Eventually I got very annoyed and wrote a letter too saying that it was a personally owned dolls’ house and the purpose of it was to give the owner pleasure.  A stance I maintain up to this day.

Having made this rod for my back prior to turning professional, this naturally caused large numbers of people to appear at my table searching for Edwardian dolls with Fourteenth century hairstyles, Tudor blokes in pedal pushers and fairies with safety pins in their ears, because, as everyone pointed out, very reasonably, I thought, I had said they could.

Hence the book on the end of the table.  And hence also the modelling of the dolls from the inside out.  The haberdasher could be at any moment in time or space but I still think she will have the basic characteristics of a haberdasher.  I have known a fair few.  They are motherly types with beady eyes and a very keen sense of peering, looking and seeing.  It’s all the small labels on the ribbons perhaps.  Comfortable shoes are of importance, you have to be able to stand all day and climb up the steps to get the wool off the top shelf.  They are mainly cheerful; there’s a lot of soothing in sorting and tidying and rolling and rewinding.  Also, I would have to say they are fairly intrepid, I have known haberdashers who would venture into bombed buildings to rescue antique lace and email places on the planet without email if they were in search of a particular trimming.  Do you think I have encapsulated all that in the modelling? 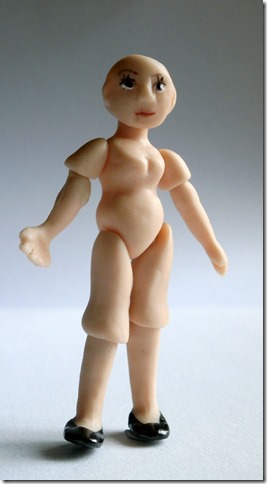 I hope I have given her the face of a haberdasher too. 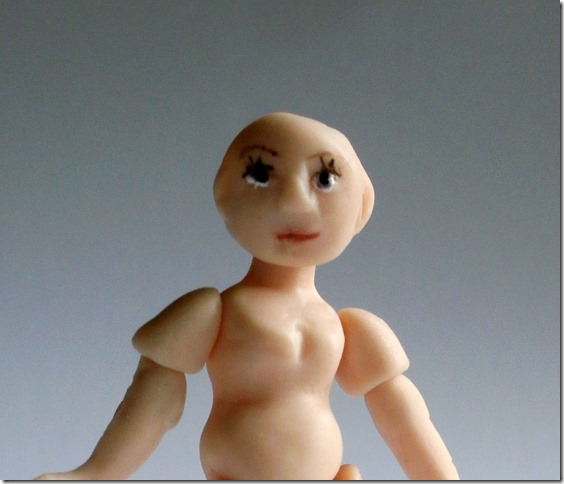 If you are looking at this with your art critic spectacles, please remember that this doll’s head is the size of a garden pea.

Requests often follow newly appearing houses, well loved television series, and the latest blockbuster movie.  I have had many requests for a short fat witch to live in a cottage  There is an abundance of magical characters at present, my favourites are those inhabiting Terry Pratchett’s Discworld, my ever-present bedside reading, though I think the witch requesters had been Pottering around possibly.  At any rate a 24th scale reasonably priced cottage kit made an appearance at Miniatura, so witches flew into the book in numbers.  I hope I have made her loveable and I think I should make a tall thin complementary witch when I have decided whether she needs a warty nose or not. 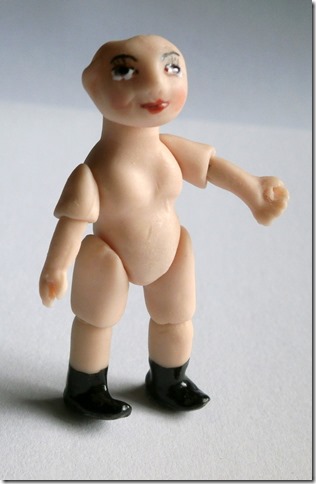 This witch is exactly two inches tall, which in reality, for twenty-fourth scale, would be four feet.  Those curly toed boots are glazed shiny black with brown worn china painted soles.  As you can see she could also be anybody’s undersized auntie.  Especially an under sized auntie with witchy tendencies.  I have had some of them, both courtesy and real in my time.  She has the bland, benign and innocently smiling countenance of the most lethal witches and aunties.  She could walk into any room, say something, start World War Three and walk out again with a happy smile.  Dangerous.

Then there is the fairy.  I think only wonderful Walt Disney thought fairies could be motherly, a bit plump and rather inept.  I have gone for the much older, more traditional kind of super glamorous, slim waisted, pointy faced, elfin eared fairy straight out of Homer and all authors south of him.  A siren, beguiling.  A pain in the neck to model because she cannot have cabriole legs like the witch, she must look as if she will only get out of bed for a thousand dollars a day or two if you expect her to smile. 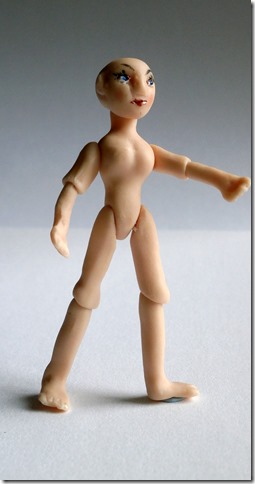 When I am making the masters, as well as the overall body type and the engineering I have to consider questions of dressing.  The fairy must have nice knees which will probably be seen and she has a flat back so that when I sew the wings to her dress they will sit and stick out well and not droop off shoulder blades.  Do you think she has a fairy face? 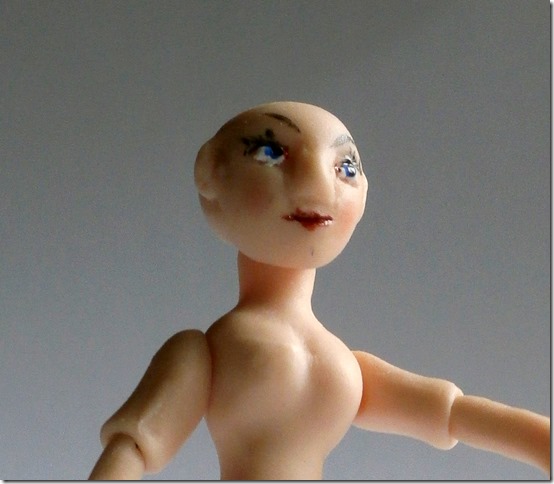 Supercilious, self assured and quite condescending.  But still lovely, and still all on a piece of porcelain the size of a garden pea.

A strange thing has happened while I’ve been writing.  I have been drawn to the dark side, I think I’m going bats.  I feel a strong urge to make a vampire.  A mittle European vampire and a very stronk urge my dear.  I vill leaf you here vile I go upstairs and check up on my etchings.  Come ven I call.  Do not brink garlic.  Vear a diaphanous nightie and I vill see you on zer balcony.  Or possibly, vear a balcony bra ant later you can pop out for a bite.  Von or zee ozzer.  Excuse me, I must fly. 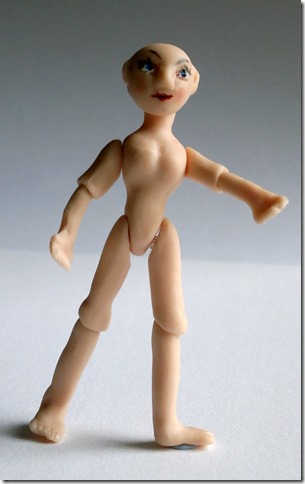 This entry was posted in Dolls and tagged who do dolls look like. Bookmark the permalink.

One Response to Dolls by popular request.