The importance of being a hobbyist.

More years ago than I care to remember Terry Curran said to me at one of the earlier Miniaturas where I had turned up behind a table instead of walking around as a customer:  Well now you have turned your hobby into your job, what are you going to do for a hobby?

Good question but nothing to worry about as it turned out.  I think I am a born hobbyist.  My father certainly demonstrated collecting things; if you’ll forgive the double negative he couldn’t not collect.  Anywhere he went featured a return journey via an antique shop.  Like any child I have found demonstration more effective than remonstration, I truly believe dolls’ houses collect me and not the other way round, I hear their little wooden voices calling from antique shop windows, websites, show tables, second hand shops and anywhere else they may be found.  They don’t have to call loudly either.  I hear them.

My real and personal passion, however, is certainly born in me.  I make stuff.  My mother wanted to be creative and I don’t think she ever realised that her cookery, which was the activity at which she excelled, even, on occasion surpassing her ability to spot all that was wrong with anyone else and say so oft and long, was her creativity.  Instead she attended classes for a variety of differing ladylike activities.  There was quite a bit of flower arranging and a lot of social clubs for the wives of.  As she was her, these were all eventually turned into an opportunity to make some very good friends and some even better enemies.  The friends got invited to some very splendid dinners and the enemies were not invited as loudly as possible.  Oh, there is a television play and several books in that.

I know people who think, as my mother did, that creativity is something to aspire to.  It is so much easier than that.  You just do it.

I cannot recall a day when I did not wake up thinking of the thing or several that I was going to make that day.  As a child I made things with paper and that terrible glue in the triangular glass bottle with the perishable rubber nozzle that you had to get a grown up to slit a hole in.  It was marginally stronger than the flour and water paste provided by my grandmother for scrapbooks, mainly in the smell.  By the age of five I had commandeered the transparent sticky tape which was expensive and came in a tin. After a couple of years my mother remarked frequently that they wished they had bought shares in the company that made it.  I must have got through miles of it.  Then I suddenly discovered plastic model kits.  Rather presciently the ones of historical figures in accurate costumes were favourite but hard to come by.  Toy shops tended to stock the big sellers which were all boy oriented; trains cars and aeroplanes.  The historical figures were not one-week pocket money items.  The most expensive one I ever managed to save for was the Visible Woman, whose organs and skeleton were all removable.  I still have her in perfect working order and found her very helpful in the early days of modelling dolls to get the proportions right.

As soon as I left home, gardening began.  In a flat I had a window box, which was by the front door, and the minute we had a house (and a greenhouse!) I found my green thumb and by the time we had a baby and no money, in the normal way, if I could grow it we could eat it and I did.

I don’t think there is an indoor craft or hobby I haven’t tried.  Once dollshousering struck I was in my element as the hobby contains every other craft and hobby but in miniature.  I have done glassblowing, metal smithing, embroidery, sewing, woodwork, furniture building, building buildings, art of every known variety, electrical wiring and lighting, modelling, sculpting and every kind of painting and everything else.  I can build a miniature house from scratch and everything in it.  And, not least, the absolute joy of researching social history, a hobby with excellent outings.

And of course endlessly, ceramics, china painting, engineering and dressmaking.

Currently also I go to portraiture once a week where my local art shop persuades people to sit still for two hours at a a time.  For some years I’ve been card making for which I bought  a die cutting machine a few months ago.  I also got into cake decorating when I needed to persuade my mother to eat, though I have since stopped as this hobby tends to be fattening.

And why?  Apart from the fact that I can’t help myself, why do I do it?  Why do I keep on doing it even when I have no time to do it?  What is it about a hobby that is so beneficial that I believe that everyone should have one?  Or two?  Or more?

The thing about a hobby is this:  If it goes wrong it doesn’t matter; if it goes right, it’s a triumph.

Whatever you pick to be your hobby should be sufficiently challenging and absorbing that while you are doing it there is no time to think about whatever would be worrying you if you were not busy doing your hobby.

Ideally there should be progression.  Either that next bit of kit which is just out of reach financially, or the next project which is just a little beyond your capability at present.

Hobby, put a stick on the o and turn the bs upside down and it will make you happy, 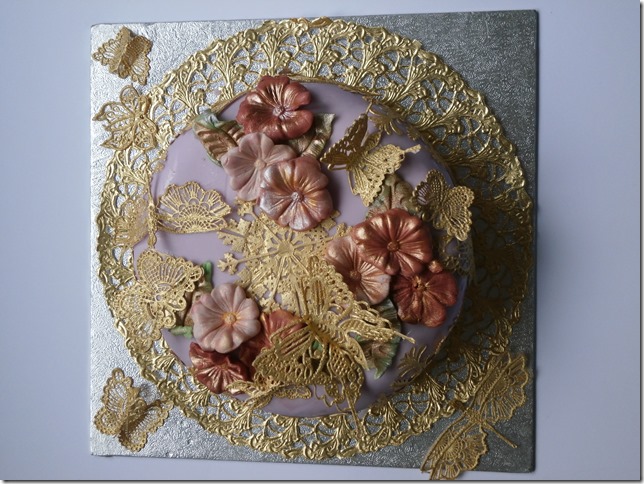 and blogging.  I do that.

This entry was posted in About artists. and tagged hobbies. Bookmark the permalink.