Happy Christmas from me and Frisco.

Finally the skip has skipped off, so have the builders, for their fortnight break.

There was a bit of a panic when I climbed up into the new loft to put the second sun tunnel window out of harm’s way.  The stuff that goes missing on building sites is nobody’s business.  Greta Thunberg would have a fit at the stuff that gets repeat bought and the stuff that gets chucked on skips (of which more later.)  So, seeing the sun tunnel lying around I popped it up the loft ladder, and for lo!  Daylight.  Two little triangles of daylight.  I got the OH to confirm the daylight, which he did.  I got the builder to confirm the daylight, which he did.  Then those that had made tiled the roof came and declared the triangles to be caused by the angle of the tiles on the sloping bit.  Then there was daylight round the bit on the old roof where the chimney has been removed, so they fixed that.  Then the joiner fitted all the lock plates in the new door except for the old bathroom door whose lock plate has turned up missing after being on the same windowsill for months.

So, one way and another it was this morning before I got out to photograph Frisco in situ. 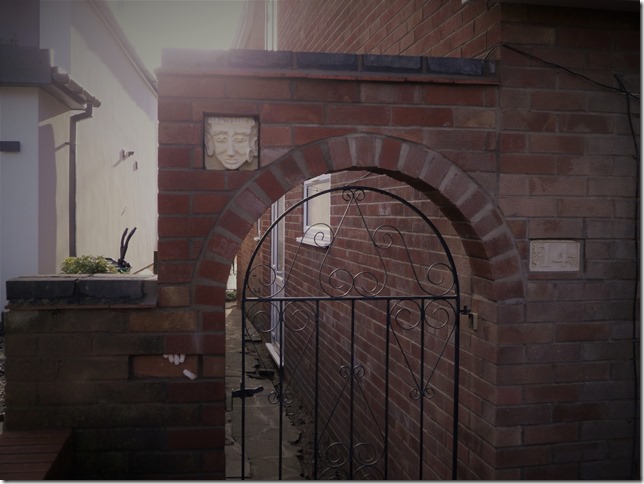 How jolly mysterious is that?  Makes you want to open the gate and slip down the alley to a mysterious kingdom of intrigue and dragons and what have you.

Actually that’s just me putting a filter on,  Unmysteriously what’s behind the wall is the dustbins and in actual light Frisco looks like this 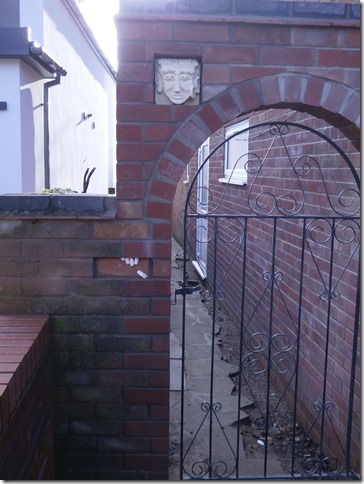 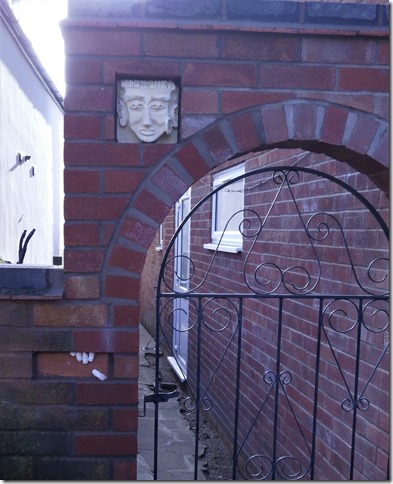 not very mysterious at all, in the wall, in the location he had to be for technical building considerations, as to how many bricks above, below and to the side of him to make it work.

And you can see all the bits round the bottom of the garage wall where the path has to be finished and so on.

But there he is, what do you think?

As to the skip, having been self-levelling in the matter of stuff being nicked, it then reversed the trend by stuff being added.  First we got a room fan, then a microwave, then a lot of boxes.  The skip was growing at such a pace I begged the builder to arrange for it to be collected before we acquired a forest of Christmas trees.

Which is about as festive as it is going to get round here.  I refuse to drape tinsel on brick dust, and as I am still feeling very bereaved and struggling with it, it suits me this year to be covered in brick dust and busy busy busy.

The OH has bought me a huge lump of limestone for Christmas. Almost as good as the year 33 ago when he bought me my first bucket of mud for doll making. Come the summer I will be out in the garden with a chisel.  Recent experience suggests that the ideal place to do limestone sculpture is not here, Jane.  The OH is still grumbling that his shed is lightly covered in stone dust.

So, as we all do at this time of year I am packing up the old stuff in my mind and looking forward to getting rid of a load of baggage by bashing a rock with a hammer.  It’s good for you.  I fancy a sleeping griffin.  Maybe. If it turns out good it will go on top of the arch if I can find several strong men.  The block weighs eighty kilos.

If it is rubbish it will go in the back garden and acquire a cluster of pots in front of it.

If it is any good you will see a photo.  About June probably.

This entry was posted in About artists. and tagged bricks. Bookmark the permalink.