Going up the walls.

I have not much time to write because I am literally going up the walls.

Yes decorating beckons.  I try to remind myself that I am two rooms short of a house full, which isn’t exactly right, The kitchen has remained untouched because we did that about ten years ago and, not only was that quite enough then, thank you, I will have no money left to do it this time after the lounge and my bedroom, which are the last two left.

We went, the OH and I, up to the extreme north of the county to visit a fabric shop. I live in the county town which had a range of things nearby such as fabric shops but these have dwindled, as has the enthusiasm for participating in them. The current situation has not helped.

I visited the nearest large fabric shop in the next town last week, unaware that Hitler was alive an well and running a fabric shop.  To the queue, socially distanced on the pavement, orders were issued:  You!  Stand back!  A customer is leaving!

At a run, it transpired, when I was eventually allowed in, causing difficulty because I wished to go upstairs to the curtain fabrics and had to stand on the naughty step until the other customer had finished downstairs and left the building when the lady owner followed me round demonstrating all the things that were not what I wanted at first glance.  Her frustration at my inability to purchase despite my recklessly touching a fabric roll with my sanitised gloves was apparent in her address to the next customer.  As I left, the queue evaporated.

So it was after a phone call the OH and I trekked to a shop far away, offering many books of swatches to discover that the fabric alone, without lining, was likely to cost £500.

Blimey, I remember when that was the down payment on a house or an entire foreign holiday for several people with an all-you-can-eat buffet.

When the lounge is finished there is a strong likelihood that my bedroom, last on the list, will be decorated with hessian on the floor and crayon-your-own wallpaper.

So today it is finishing the prep for the lounge, which started with destroying the angels.

Many years ago when we went to Pompeii, the frieze that the ancient Roman cowboy builders had in their very posh dining room, of cherubs making wine, impressed me so much I copied the Vetii and did some of my own round the top of the lounge walls.

But now they have to go, which entails scrubbing them with rubbing alcohol. 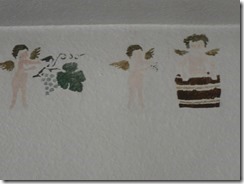 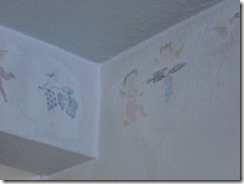 I don’t expect many folk start decorating by rubbing off the angels.

I am planning to have a bookshelf up there.  The OH doesn’t want another frieze.  He didn’t like the previous one, which was squirrels.  He believes you should buy one. printed, by a wallpaper company because they have proper artists.

See what I’m up against?*

*The skirting board with sander, after I’ve been out to get some primer.  I might be the one person you know who never got bored in the lockdown, I never had the chance.

This entry was posted in About artists. and tagged decorating. Bookmark the permalink.