I am currently enjoying Hochanda, which stands for Home Of Crafts Hobbies and Arts.  It announced its fifth birthday and a competition to make a birthday card.  As I was supposed to be designing the frieze and was stuck I didn’t need inviting twice.  Just as soon as I had finished the moving house card I was doing for a friend.

Having then only three days to do it before the deadline, I naturally planned to make a card five and a half feet long by six inches tall.

I thought I had gone past the days where I worked myself into exhaustion, but apparently not.  I worked until my eyes stopped working, which is not a thing I have experienced before.  Sunday morning, after a few hours sleep, I simply couldn’t see. Roll on the cataract operations, this is very frustrating.

Finally finished and photographed, yesterday afternoon, I took it up to the post office, where they carefully explained that there was no way it would go before tomorrow morning.  As the deadline is tomorrow afternoon I have failed miserably.

But I still enjoyed doing it. 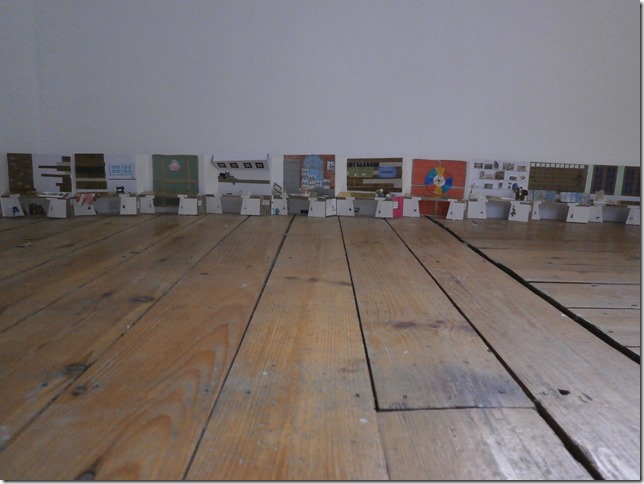 I have photographed it at the top of the stairs, which was the only place I could find to put it down, spread out.

Hochanda studios are, like most television studios designed for the cameras.  They are a row of sets, like room boxes.  They are ranged on either side of a long hall with a huge area in the middle for the cameras, their electric cables and assorted technical bits and pieces.  Each set is a box simulating a room and a table in front for the wares they are purveying to be displayed and the demonstrators to stand or sit behind and do the demonstrations that make us, the shoppers, want to buy stuff and have a go.

So that is what I have tried to reproduce in cardboard, for what is after all, a birthday card.

I started by measuring my available card. I had some kicking around that was six inches by sixteen. which, scored, would give me two back walls of six inches, two return walls of two inches and two left over to bend behind and glue to create an endless run of however many studios I wished to make.

I consulted the presenter details on the web site.  Ten presenters were mentioned, so I made ten six inch square zig zags, all joined together.  I didn’t realise until the entire length and the counters were all constructed, fastened and decorated that there are, in fact eleven presenters.

I cut a six inch square to decorate for the back of each studio, based on the actual studios, as on television.

The tables in each studio are supported by white wood trestles.  I cut the tables twice the height, bent them in half and drew and cut the trestles on the bottom.  As the birthday theme was the Wizard of Oz I embossed gold card to a brick pattern and glued a strip to each table top to reinforce the structure..  The backs were drawn and decorated with alcohol marker pens, cut embellishments, such as windows and so on.  The return of each table has a cupboard with silly things drawn on it, such as presenter props, comfy slippers and so on.  I am quite proud of the cage with Matthew Palmer’s bearded chough in it.  Some of the cupboards have cardboard doors.

The presenters are drawn with a matching shape glued to the waist, then bent out so they will stand.

There is a space behind every counter for a presenter. 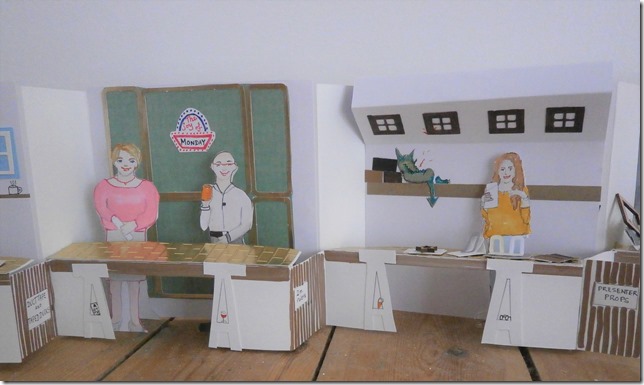 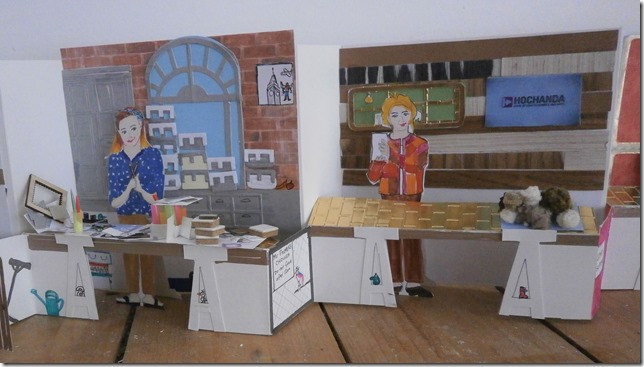 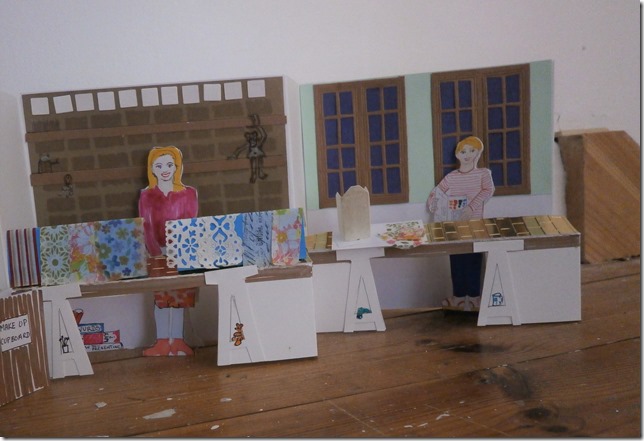 I enjoyed doing them all, especially Leonie Pujol.  Leonie, who has a show twice every Wednesday, called Let Leonie Loose, has practically lived at the studios since the start of lockdown.  It has been her endless cheerfulness that has helped me to keep going through lockdown.  I have been trying to support elderly friends by telephone; when it got me down it was Leonie was pulled me back up.  Needless to say, if you are the arty type, who inhabits the same studio for several months without having to tidy up, you eventually get to inhabit a creative space with about six square inches left to work on.  Just like the rest of us. 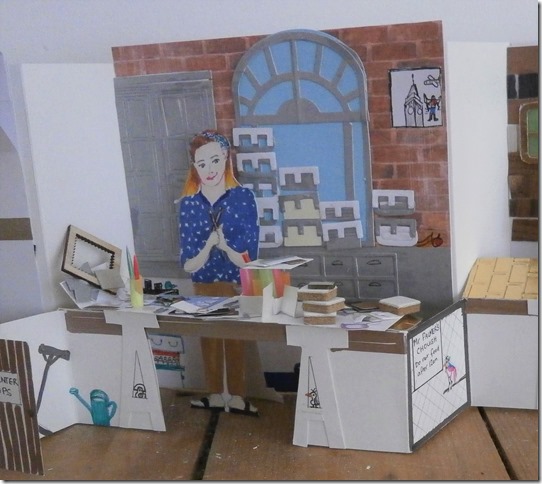 I loved every minute of doing this, even though I know it is sitting under the post office counter and will go nowhere until tomorrow and not be in time to enter the competition.

As you know I have spent the last year redoing my house.  As you can see, I am still waiting for carpets.  Time off to do something for a lark has been a bit of a holiday.

It will probably arrive through the post mangled, mashed and late but. as all arty stuff, the joy is in the doing.

And I did enjoy the doing.

This entry was posted in About artists. and tagged making a birthday card. Bookmark the permalink.