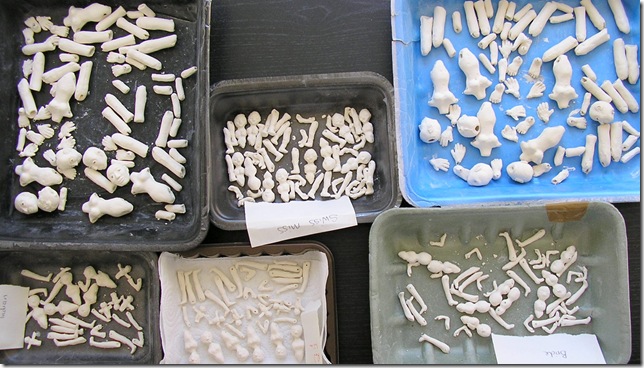 Do you remember this, a few weeks ago?

The trays along the bottom and the one in the middle hold the beginnings of a new range of 2 inch collectable dolls. So far there are seven dolls in the range with more planned as time permits.  The original sculpting took about three weeks because every doll is different, not just the same doll dressed different ways.  Pouring took a week, rubbing down took a week and then when I put them in the kiln, for lo!  It fired not.

There had already been a problem when I went into the garage to set it up for a firing.  I found, in a freak accident, that a bag with rolls of wallpaper in it had fallen off the shelf, bounced off the kiln, breaking the ceramic bung sleeve and landed on the floor.  Calls to the manufacturers, who no longer manufacture, did not bring forth a replacement sleeve, merely advice that it would be OK to fire with half a sleeve.  So, half sleeved, I loaded and turned it on. Well, it warmed up a bit, deposited a ring of rust on the top shelf and that was your lot.  I stayed up with it till half past two until it was lukewarm, meaning it looked warm but it wasn’t really, switched it off and went to bed.  I unloaded, rang the kiln engineer, scraped together all my money and borrowed the rest out of the housekeeping, oh it is going to be slim month, and waited two weeks till the engineer was in the vicinity.  Finally he arrived and spent a whole afternoon, including an accompanied trip to Halfords bike shop for the right kind of connectors, and now I have two working kilns.  The one from Terry, that has sat in the garage all winter, is fine, though rusty on the lid.  I will have to get up the courage to fire it because the plug got very very warm in a half hour test, though the engineer said it was all right.  How glad I am to have invested in a dedicated bit of heavy duty wiring seventeen years ago.  Mine has had the regulator knob replaced, upside down because of wiring something – I shall have to do headstands when firing.  The half bung sleeve has been cemented in, which may have cured the rust deposit problem that has plagued me for about eight years.  Therefore, I am now a close relative of Monty Python’s famous Arthur two sheds Jackson and you may call me Jane two kilns Laverick, if you wish.

Fired objects eventuated three weeks later than planned, in the normal way, because, as soon as you plan something, I find, the Gods of Planning take notice.  Temporarily they suspend their town planning activities, drop the Sixties brutalist tower blocks in a heap on the middle of the eighteenth century market square and rush off to the other Mirror of the Gods to see what you’re up to.  ‘Ha!’ they cry, ‘a mortal with a plan!’  They take it as a challenge, they so do.  The only thing they enjoy shoving their oar in more are governmental elections, the twists and turns of personal illnesses, agricultural endeavours and plumbing (plumber ho!).

So, finally, midway through last week, ten trays of assorted bits had been sorted and assembled into seven different ethnic dolls.  The reason for doing dolls of many lands is really a trip down memory lane.  When I was a teenager air travel for holidays abroad was becoming a possibility for many people, some of whom not only went as far as other places in Europe but even returned with souvenirs for their less fortunate friends. Local sellers in tourist hotspots, aware of the commercial possibilities, lost no time in producing ethnic dolls in local costume and, as everywhere is ethnic unless it’s where you live, there was no shortage of dolls to collect.  Many of my friends had substantial collections and I had quite a few dolls, mostly cheap plastic dolls but often beautifully dressed.  My parents who holidayed a number of times abroad, without me, abroad being considered unsuitable and too expensive for anyone but robust adults, brought dolls too.

I am working my way round the world in dolls. At the end of last week I started on the Indian ladies.  Here they are in their underwear. 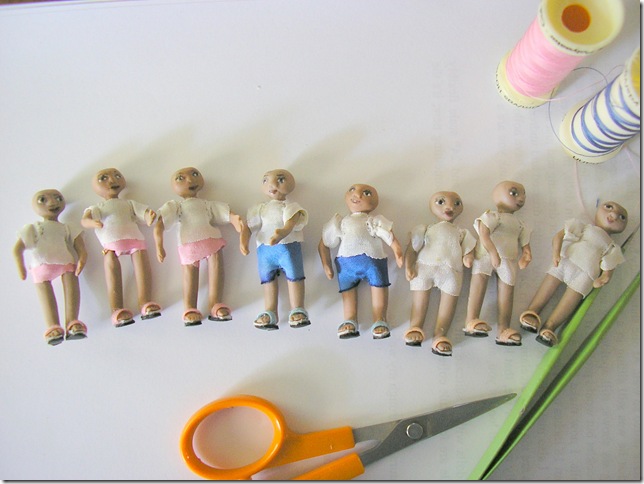 Yesterday with a concerted effort I dressed them all and today, with a bit of luck and a following wind I shall do my best to be couturier to the tiny Inuit. 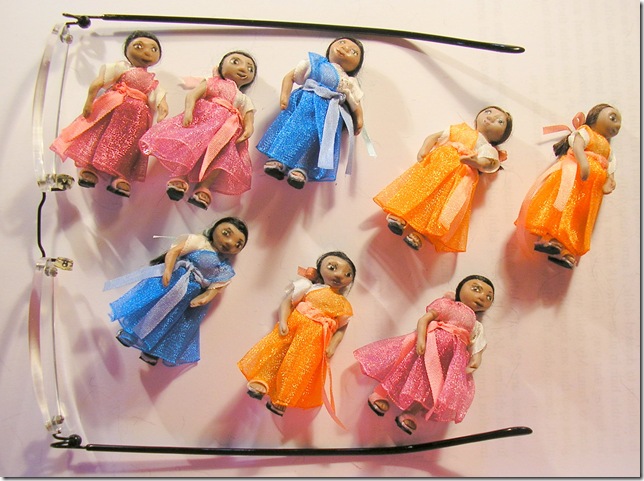 JaneLaverick.com – a full set of kilns and both of them rusty.

This entry was posted in Dolls and tagged ethnic dolls, Kilns. Bookmark the permalink.