Going up the walls.

I have finished going up the walls.  It took a couple of weeks because I had to have enforced breaks when my metal arm seized up. 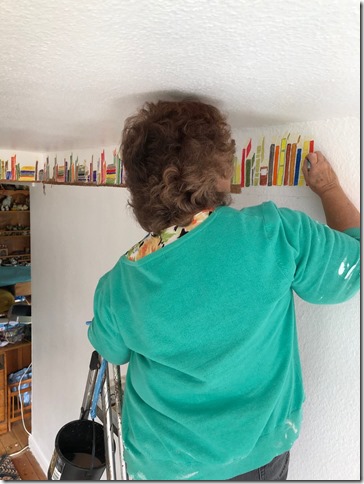 I don’t suppose Michelangelo had the same problem.

(If you have low self esteem I’d recommend painting a frieze – instant delusions of grandeur!)

Actually he did, he kept a diary, complaining constantly about drips of paint in his eyes.  His first lot went mouldy and he tried to use the mould as a get-out.

When I was immersed in dolls’ housering I discovered that replicating work of the past, in miniature, answered many questions about architecture.  In the main the answer was: because that’s what they had to do to make it work.  At the foot of this column I will answer the interesting question: Why are all the figures on the ceiling of the Sistine Chapel outlined in black? I was amazed when I went there.  It gives the entire work of art a fantastic cartoon-like quality to modern eyes. (And I do mean Tom and Jerry.)

So anyway, not the Sistine Chapel but would you like a look? 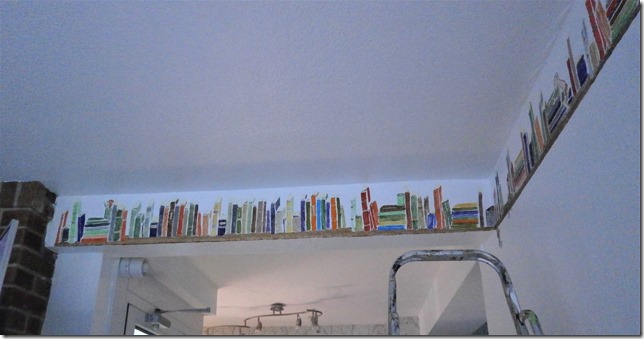 It starts along the RSJ that separates the dining room from the lounge. Here I strictly stuck to books and your suggestions, pencil pots and so on.  And the stencils I had drawn and cut. 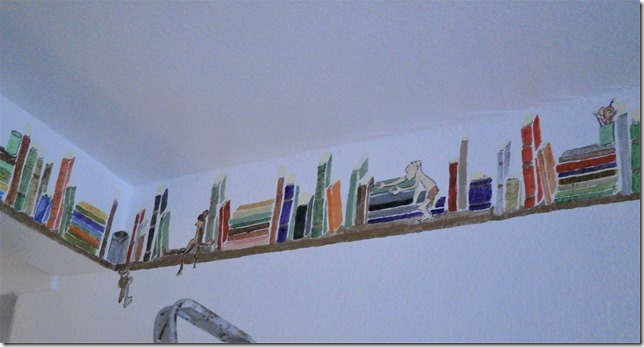 There’s a bunch of keys going round the corner and a sock monkey.  Then I did exactly the same as Michelangelo, abandoned the plan and did what I liked.

For some time, thinking endlessly about books, I was struck by a notable feature of literature.  Namely that the best drawn characters transcend the pages and take on a life of their own. So I began to add the characters who have jumped out of the pages at me.  Here is Gollum.  Yes we love Frodo and his friends and assorted wise and kind elders and magical creatures but it is poor gibbering Gollum I love the best.  He encapsulates the nature of addiction and stands for a universal truth that we all recognise and find echoed in ourselves, which is really what great writing is about, I think.

Then there’s a musical box, which a couple of people suggested and I do have on shelves.  Then there’s Mr Toad just about to get into his shiny yellow motor car.  I do love Toad.  He is utterly obnoxious and reminds me of my mother. Loud, crass, fearless, tactless, hypnotic.

On the end of that wall there are inhabited books, a tribute to Colin Thompson, who I missed until Megan told me about him.  Up at the top of the wall the detail is too small to see well, which is why none of the books are titled.  And there is an owl money box.

The window wall will be covered with curtains, so the next painted wall is the one behind the sofa.  Here reigns the wonderful Nigel Molesworth imparting the nollidge you need to akwire to keep the brane klene and be topp.  This 1950s hero, written by Geoffrey Willans and drawn by Ronald Searle, was my childhood icon.  Not only did I long to be subversive, I too went to a posh school with huge amounts of healthy sports, strange swots and unfathomable parents.  I had days when I felt Nigel Molesworth was the only person in the universe I had anything in common with at all.

Next to him is a scene from my unpublished book in which Socks the cat climbs the ectoplasm net into the biplane and then there is James Bond.  If a character ever escaped, it is James Bond.  He is a billion trillion pound, multi-person phenomenon.  He is the absolute embodiment of everything the red-blooded Western male aspires to be. He is suave, cool, good-looking, strong, brave, daring, successful, on the side of good, always gets the girl and has killer throw-away lines.  I don’t live too far away from Daniel Craig, whom I once saw cycling down my road, wearing a balaclava.  I am quite certain it would have been the meeting that moved mountains, had he not been cycling quite so quickly and me been digging out the dandelions prior to planting 20 mid-season tulip bulbs.  You see? He is actually a middle aged actor and I am a very (very) late middle aged gardener.  It’s the power of the character, that’s what it is.

Next up Alice holding the ‘drink me’ bottle, discovers a small sized door and wishes to go through it.  A miniaturist no less.  I wonder how many girls have been called Alice because of this Alice?  My granddaughter’s middle name is Alice, for this reason.

Then there’s Terry Pratchett’s Granny Weatherwax and Nanny Ogg off for a stroll in Lancre Forest with Greebo.  Oh I do love Greebo.  I was spoiled for choice with Terry Pratchett, few writers have authored such phalanxes of memorable characters.

Here we are going round the bend 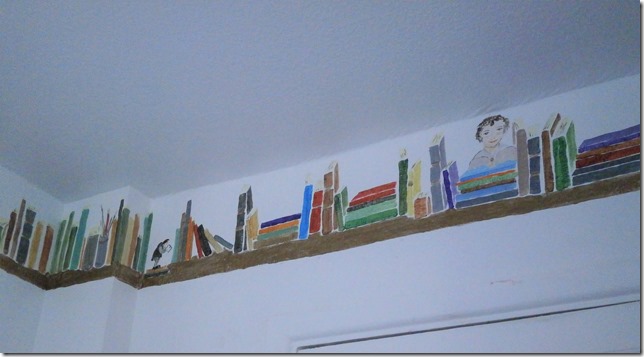 First there is Matthew Shardlake, CJ Sansom’s Tudor Lawyer.  I think this character is hardly beginning.  I do hope he gets into film before the author is much older.

Last, but not least, Mr D’Arcy fresh from the duckpond.  Oh yeah.  Colin Firth says he has been a curse, which might be his own fault for draping himself with duckweed so effectively.

And that’s it, my oeuvre.

The OH hates it with a passion.

I am not going to do the doileys, I think that’s it.

It used up a whole box of acrylic paints and two pots of gold. (Paint.)

The reason Michelangelo outlined his people in black was that he got down from the ladder after a couple of days, squinted upwards and said:  You can’t see them from down here, I’ll have to do something about that.*

So, what do you think?  Rubbish?  Not far off a public convenience wall?  Like a kid’s bedroom (this is the OH’s opinion.)?

**And, of course he said it in Italian.  But you can imagine the gestures.  It’s quite annoying, when you suspect you have perpetrated art, to climb down and find you can’t see it.  Sciocchezzo!***

This entry was posted in About artists. and tagged friezes. Bookmark the permalink.