You may say that there are bigger things to mourn today.  So there are.  Man’s inhumanity to man, in any place at any time should make us sad.  You may say that a fox is just being a fox and a cat is just a cat.

Ronald Searle, the great cartoonist, described his time working as a prisoner on the Siam-Burma death railway in the Second World War.  Starving, one day he and some fellow prisoners found some kittens and played with them.  The next day they cooked and ate them.  Ronald Searle ascribed the way cats crept into so many of his later cartoons as the result of guilt.

I met Cleo when the S&H chucked out by a girlfriend, came home bringing his cats.  In the first flush of enthusiasm, the girlfriend had weakened when the S&H had kept putting ‘cat’ on the bottom of the shopping list.  I am quite grateful she did not succumb to the subsequent ‘horse’, though the S&H may have been pushing the joke as much as his luck.  He went to a dreadful breeding farm and rescued the little one hiding under the furniture.  Back at the flat the little one had two little ones of her own.  The S&H asked for advice; I suggested a trip to a vet unless he was planning on becoming a cat breeder; not an ideal career in a block of flats with a ‘no pets’ policy.  One kitten was rehomed and then the girlfriend and the S&H fell out and home he came with two cats.

A friend of mine said ‘What an imposition!’  I agreed for about three days, after which I was a gonner.  It had been twenty years since we lost our first cat, who lasted to nineteen and a half.  I felt the loss so keenly I said I would never have another cat.  In the same year my cousin’s son died of a brain tumour, he was only thirty, and we all lost beautiful Princess Diana in a terrible car crash.  The world seemed too sad to contemplate.  It was, for a while.

Then along came this little cat. 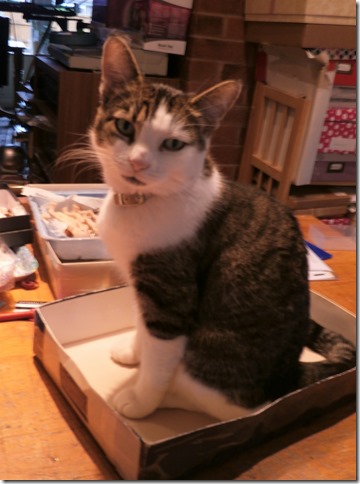 the perfect size for sitting in a box, helping.

Or, equally, having a nap on the work you were planning to do 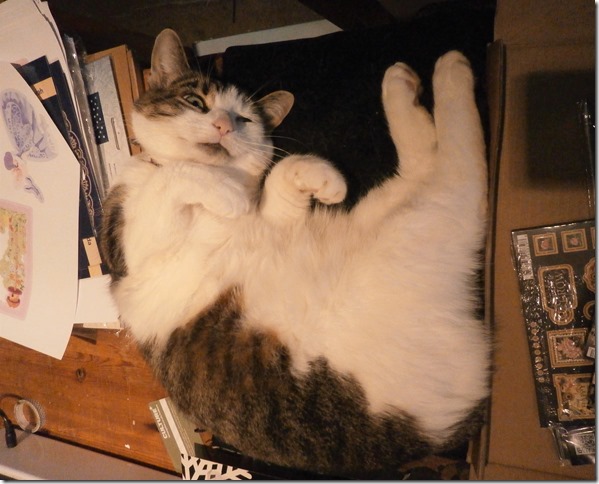 For five years I loved these cats, especially Cleo, who was little.  One of the undertall but a cat. Absolutely perfect.

But then the S&H married, had children and moved to a larger house with room for cats and children.

The day he came to collect the cats, she tried to dig her way out of the basket and I had to run indoors, crying (because I do not cry.  I am made of boiled nails.)

But she went to live with him, they moved to a bigger house and the cat was a shoulder cat.

Then I started breaking bones and got cancer and the surgery went wrong.  So I asked the S&H if the cancer came back, to bring the cat back to me and he agreed.

I hope there’s a heaven for cats and dogs and pets in general.  All those little animals that live with us and give us unconditional love, no matter how rubbish we are.  Animals contribute so much to our lives.  They are excellent companions, teachers and time wasters in the most life-affirming way.

And it is above all safe to love them because they cannot speak, safe because they only want a stroke, or a walk, or the big monkey with the opposable thumbs to work the tin opener.

You may remind me that I put my mother’s cat down, at her incessant request.  I did.  I did the same for the first cat, who had a rodent ulcer that was incurable.

And this is the problem with pets. We are.  We outlive them.  Unless we are old and frightened that we won’t.

Loss is the price of love.  It hurts your heart.  It sits, like lead, in your feet.  It makes the day of loss interminable and then subsequent days speed up, taking you further away from the loved one.  It gives your soul a right good kicking, until it is bruised.

The bruises of your soul are wisdom manifest: blue for knowledge, red for hurt, gold for the love that runs through every life of every sort, that makes the wonderful world.

This entry was posted in About artists. and tagged loss of a pet. Bookmark the permalink.