The poor S&H needs a visit, I thought.  When things go wrong a hug from Mum is a help.

However, it is a long way and a long time since we went there.  The OH has found and been bought very, very expensive new shoes that help his crumbling feet but has not driven far in them; I will not drive that far with the constant whining noise in the next seat.  Did we need to go on one day, stay in an hotel overnight, as the mature are prone to do, apparently, or could we, taking into account feet, bladders, eyes and other bodily parts, do it in a day?

Therefore, it was suggested, we should go for a day out somewhere, some way away, not necessarily over the rainbow but a reasonable distance and see how we did.  Coronavirus restrictions being lifted, a visit to another town seems less risky than hitherto.  The OH has always wanted to visit Cambridge.  When he was the County Emergency Planning Officer of the next county he went there for meetings that were in a large venue on the outskirts but he had never ventured into the centre, reportedly pretty.  Moreover, a friend of his, who had been to university there, said it was an easy place to get around in.  Little he said, you couldn’t possibly get lost.

I am quite stupid, yes I am.  I took the word of a drinking friend of the OH, whom I have never met and, stupidly trustingly, did no research of my own.  I am your dim friend.  Oh yes, der.

Our destination decided, the fight in the morning about time of setting off was reasonably brief, so we set off in a huff, or other wheeled conveyance (my car which has the aircon) at just after nine.  I begged the OH not to drive to terrify me, eternal optimist that I am, the car was pointed east and we went.

The theme of the day, which was being lost was established fairly soon.  We arrived at a brand new stretch of road and the SatNav threw its hands up in horror. Warning Uncharted Territory.  CAUTION, UNKNOWN ROAD.  It announced repeatedly in sepulchral tones whilst showing nothing whatsoever on the screen.  Thus was the second theme for the day, not being able to operate the helpful electronic maps, established.

Ten miles of utterly uncharted A road and a couple of incognito bridges, like the Man With No Name in the cowboy films were sufficient to establish that we were in the Badlands of Unmapped Britain (next village three miles) but suddenly the virgin road surface gave way to the usual littering of exploded tyres and grit and we were back on the radar again.  The SatNav, suddenly gaining confidence came back on line and began to warn the driver that he was speeding.  It warned the driver:  Beware! three times before he lost patience and switched it off, approximately three minutes later we were flashed by a speed camera helpfully upping the cost of the trip somewhat.

See?  If I tell him he’s speeding, I’m a nag.  If the SatNav tells him, it gets switched off, and so, he will persist even unto fines or driver’s ED.  You really can’t tell some people (another theme for the day.)

Two hours, one restroom stop, some points on a licence and a pop quiz on the radio, later, we arrived on the outskirts of Cambridge.  We then relied on the driver’s internal radar, which does not exist, and, ignored all pointing from the passenger, who was reading the road signs and pointing: Look, City Centre!

After three one-way streets and twenty minutes of suburbs and tiny back streets, he finally caved in and asked a pedestrian, who, naturally pointed in the same direction the passenger had been pointing in for twenty minutes.

In the centre we drove gaily past the entrance to the multi-storey car park (which we were to exit in the wrong one-way direction  for the benefit of another camera, later,) and had a little tour around the one way system before we encountered it again.  Finally we parked up, and telling each other which level and area we had parked in and both instantly reverting to default setting of: mumbling noise from spouse, ignore, forgot where we were immediately.  Though it became urgently obvious that we were not in proximity to toilets at all.  Fortunately a lift decanted us into a shopping centre.  After a very quick trot down the stairs to the basement toilets (closed for cleaning) and a slower trot back up we discovered the main shopping centre toilets,  Mafeking was relieved and the day out began.

Half a street away we were in the centre of town which is a market place.  You could tell it was a area redolent of students by the fact that it was an area redolent of cooking smells.  Every cuisine of every street everywhere and a sweet stall, which enjoyed my custom until I remembered my diet and felt the weight of the bag which I had over my metal shoulder.

Fortunately as we ambled along we came across a very good bookshop.  Like most university towns, Cambridge seems to be well endowed with book shops.  Cambridge University Press is the oldest bookshop on the same site in the country and has been publishing and printing since 1584.  The OH has signed up for a distance learning course in Astronomy and Cosmology.  You may ask what the difference is, apart from Carl Sagan, who always said ‘Cosmos’ so cutely, and, indeed, the OH and I are hoping the course will enlighten him to the extent that he can tell me, because I would like to know.  He was keen to see if the shop had his coursework book, which of course, it had, though the Big River outfit has it for less, a fact the OH provided on his phone to the lady on the till, who lowered the price to match.  One course book later and a quick lecture book on What is Life by Mr Schrodinger, which seemed a good question in light of the demise of the little cat, for me, and we were out in search of the river with the OH carrying the bag.

The OH was very keen to see the river; punting on the river Cam has been going on for about a hundred years.  A punt is a boat with a flat end on which the sailor, known as a chauffeur on the Cam, walks whilst sticking a pole into the river bottom and pushing, walking along the boat and retrieving the pole.  Various novels and writings have explored the comic possibilities, so we walked via the wrong street indicated by the OH and his on-phone SatNav, encountering some students protesting, running along with banners, hotly pursued by the police, running along with radio phones.  It was all quite energetic and someone in the crowd said they were protesting to The Speaker.  In a town where everyone is encouraged to get on their hind legs and say something, this was a fairly equivocal statement, in my opinion.

Two wrong streets later we followed my nose and found the river and a pub serving lunches by the river and while the OH did the ordering I talked to a fairly excited couple, about our age, also there for the day.  Apparently just a few minutes earlier a punt had passed at a leisurely pace, followed by another punt, low in the water, just out of TV camera shot, laden with huge secret service men, bristling with guns.  The lady said that in the first punt there had been an important American called Nancy Posy, or something similar.  Nancy Pelosi? I enquired.  ‘That was it! Do you know her?’  Oh, that Speaker.

Yes indeed, Nancy Pelosi, hearing that we were out for the day, had decided to follow suit, just missing us by tourist attractions all day before popping into the Cambridge Union to give a speech and receive an award.

After lunch the OH decided he wished to see the Mathematical bridge.

The first street we went up was blocked off.  It was populated by some workmen straight out of Shakespeare’s comic scene with workmen to put in play ? talking to Lady MacB?. Cheer things up a bit?

Following some enjoyable banter I rushed after the OH up the next street on the left which was also blocked off.

The OH got out his phone with SatNav.  (Shakespeare would have put this in every comedy, if it had been invented.)  We trekked for a good fifteen minutes, and, as we then appeared to be on the outskirts of civilisation turned and trekked back.  The OH had had his phone upside down, helpfully, as you do.  We noted the Loch Fyne restaurant on the opposite side of the road and trekked back to where we started, to the cry of ‘Twelve minutes walking, it says here, twelve minutes!’*

I asked a person, who directed us to the restaurant we had had lunch in, where you could observe the Mathematical bridge by turning your head, very slightly, to the right.

I was extremely keen to see the Fitzwilliam Museum, which was founded in 1816 and has half a million objects.  The OH did not want to ‘Spend all day in a museum,’ though he never said at this point, or any other, that he wanted to spend all day tramping the streets, which is what we did.

Guided by the OH’s in-phone Sat Not we tramped the streets again for a lot more than twelve minutes.  Eventually I spotted two children, dressed as policemen.  The girl was very pretty, so ignoring my urge to ask her why she did not just marry a nice man and have some children, instead of tramping the streets, like us, we asked for the location of the museum.

Ten minutes later we discovered it was the building opposite Loch Fyne.

At the door we found out that, though it was free, you had to book.

Finally the OH put his phone to good use, booked us a spot in five minutes with an Email ticket that he only deleted twice before being able to show it to the chap on the ticket booth and we were in.

Gosh it was good.  There is some fantastic pottery, lovely Roman and Greek stuff and some fabulous Ancient Egyptian artefacts.  Actual linen clothing thousands of years old.  Quite wonderful.  We spent ages in the museum, had a cup of tea and decided we would go home because, for some unknown reason, our feet were aching.

It was a great day out,  famous people have been founding colleges at Cambridge since 1284. Seemingly every one of them has then had his statue carved and stuck on the building that he founded.  You can absorb a lot of sculpture just by tramping the streets, which we definitely did. 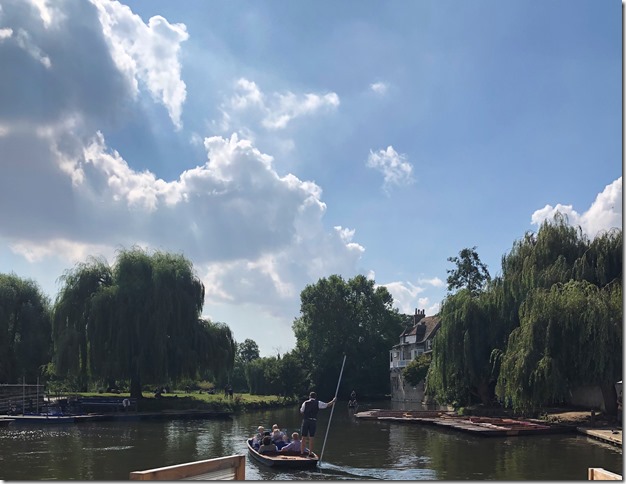 Nancy Pelosi was here five minutes ago.  She probably knew how to work the SatNav.

This entry was posted in The parrot has landed. and tagged day trips. Bookmark the permalink.