I should be so lucky, lucky……

This year has been such a joy from the off.  Dedicated readers of this column will have noted the first up, best dressed, early starting nature of the awfulness, commencing in the first few weeks with swine flu.  You may recall that I was one of the last people in the country to be counselled by the swine flu help line, my helper being utterly unintelligible, even if I hadn’t had a rocket high temperature and diarrhoea surprise throughout the conversation which went, you may recall ‘Is der paychent grey? At all all?’  “Hang, on, I’ll get a mirror.” ‘Is der paychent lyin on der floor, at all?’ “I’m lying on the table.”  ‘Yer hev to answer yes or no or I hev to begin again.’ And she did, eventually issuing a 13 digit security note to remember and take to an unknown pharmacy miles away.  They shut the help line a week after they helped me, I didn’t eat for three weeks, lost a measly five pounds in weight and put half a stone on the moment solid food passed my lips and stayed there.

Then there was the craft fair in a field, for this I curtailed my working holiday in Edinburgh whilst still paying for a week (the shortest let) to rush home to exhibit at which.  The organisers having taken plenty of money off all the exhibitors but failed to advertise at all, placed the knights and jousting exhibit, whom they were paying, in the warm spot by the building and the exhibitors with lightweight stock, who were paying them, by the gale-ridden lake.  Additionally they had put me with my original artist handmade greetings cards, next to a commercial seller of greetings cards with a loud voice who was not shy in advising the passer-by that ‘actual artists had been involved in the designing and they were carefully printed on card.’  I would have chucked myself in the lake but was too busy worrying about whether I would have a heart attack.

That was because this was the year I popped into hospital in the middle of cooking batch meals on wheels for the aged parents, as you do, in order to be injected twice with rat poison, as the ECG, going bananas following one tiny diuretic pill, an attempt to decrease the elephant ankles (a response to the one slightly warm week of the summer) had suggested I was about to conk out imminently.

I didn’t croak, which was quite handy, enabling me to be fully present for the car crash, where I narrowly escaped being impaled by a tree in order to receive the full blast of seat belt injuries.

The car being written off, meant that we were obliged to buy all the necessities for the kitchen makeover and house electrical rewire, in a rush, in a courtesy car, which of course, in a rush, was the way we bought the new to us car, from smokers, with a dog with long white hair woven into every fibre of the seats.

A couple of years ago I cleared the garage to make a lovely space for my kilns, pottery of sorts being what I do.  They sat for some time on the cleanest bit of concrete in a five mile radius.  Then the son returned home after nine years in Scotland, instantly filling his bedroom to the ceiling with junk and successfully turning the beautifully clear garage into an arcade games machine building workshop.  The machine is, naturally, unfinished as he got a job, and huge, because they are.  However his efforts at destroying my workspace, were, I feel, amateurish compared to the unbelievably expensive plumbers, sub-contracted by the builder to reroute pipes from the kitchen into the garage and back into the kitchen.  In the course of this my precious kilns, used as a table for cement bags by the builder, were chucked around and buried under all the stuff from the garage shelves that were put to rot outside on the path which was head high with kitchen units to be reused, all delaminating in the monsoon.

It has been a struggle to keep listening in all the confusion, which is how I may have missed the builder talking about the way in which he had no choice but to follow the floor.  ‘It slopes,’ he said, ‘that way and then that way.’  The kitchen units we are reusing for reasons previously stated as poverty, (though paltry in comparison the the poverty we are now enjoying thanks to the receipt of the electricians bill; electricians, apparently, costing several thousands of pounds for three days spent standing on the drive smoking and phoning a friend) are old and not height adjustable.  Consequently, as the floor slopes, so do the kitchen units.  How much this is going to cost in smashed eggs in the future, one can only guess.  The slope has been highlighted in a designer way by the tiling, triumphantly announced by my husband as ‘cut to fit, individually!’ under the windowsill.  Looking at it, whether the window is going up or the floor is going down, either way it may be the only dry land kitchen capable of making you feel seasick and that’s before we even get the grouting lines in.  The tiles, chosen by him from the discount pile, are shiny blue and carefully designed to attract and showcase every atom of filth in Technicolor, unless you switch on the pounds a minute to run downlighters, that make the dirt fluoresce.

It is, you may recall, a mere three weeks from my best chance to make any money this miserable year and I should be working my socks off, having lost so much time with the car crash unable to work.  I usually pour porcelain in the kitchen and fire it in the garage.  So that’s out.  Perhaps I could dress a doll on the dining table, as usual.  Here is the view of the dining table from one end 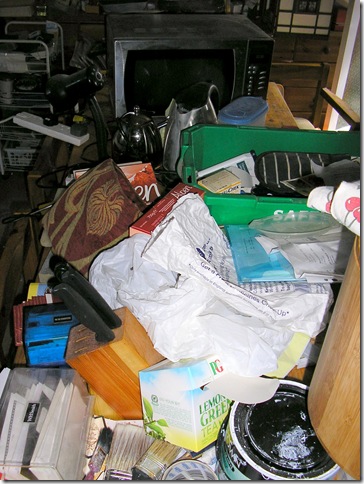 and, as I obviously can’t work there, let us go up the other end and observe the only two inches of space on a flat surface in the house, which is currently being the kitchen.  Perhaps I could work there? 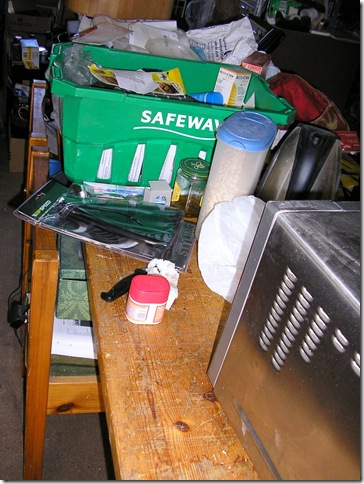 Or not, as the case may be.

I should just like to say this has been typed to a background of someone grinding tiles with yet another costing most of £100 but ‘We have to have this, Jane.’ gadget and sucking the waste, noisily, through a broken vacuum cleaner, which only now works with a cork in the hole left by last week’s mystery object, which you may recall, was the wheel, not just for getting around but useful for the purposes of making the vacuum cleaner suck, though should it be able to suck as much as current conditions, we could clean something, a bit.

This week, if there emerges space for working, I can’t; I have to go back again to the opticians to find out why the replacement contact lenses are still giving me the migraines I’ve had for the last three months, to the dentist to be told off for grinding my teeth and to the hairdresser to be permed for the school reunion that I agreed to when I was half a stone lighter before living off microwaved ready meals with no workouts and didn’t have spots and ingrained filth in every pore.

This entry was posted in The parrot has landed. and tagged events of 2010, kitchen makeovers, luck. Bookmark the permalink.