Here’s a sight you haven’t seen, I think, for about seven years. 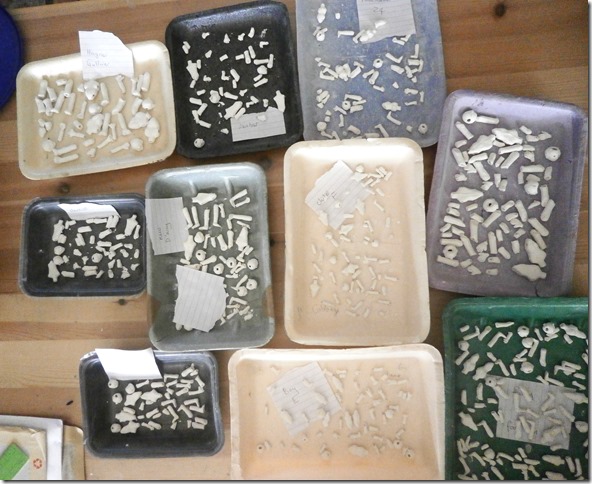 Or, more specifically, my dining room table where it looks as if it has been raining doll parts.

I meant to be pouring over my work much sooner than last week, after Miniatura but I had Covid, which delayed the action.  I meant to be continuing making dolls seven years ago but was circumvented by caring for my mother, which increasingly ate up all available time as she worsened.  Then I had a broken arm, then I had cancer, then I had surgery, then I had ten hospital readmissions, then I had major surgery.  Time just flies by when you are busy, doesn’t it?  But finally I thought I was well enough to stand for hours at a time, pouring porcelain.

I wasn’t.  So, as I was the one who designed the kitchen  over ten years ago, with a space under the bench not filled with a cupboard, so that someone could sit down and work, I obtained the padded step stool that had disappeared into the OH’s workshop and sat intermittently.

The truth is that you need to stand over the mould to pour porcelain, because you need to see if it is going in right.  For the moulds for twenty-fourth and below you don’t actually pour, you inject with a syringe, which needs not be nearly empty, because that way you inject air.  This turns into bubbles, which you find in the body of the porcelain as you rub down, as holes.  Unfortunately I was not as fit as I thought I was and sat down more than I meant to, and I am discovering the holes to prove it, right now as I am rubbing down.

I did three and a half days pouring, which will take at least a week to rub down.  The dolls parts are small. 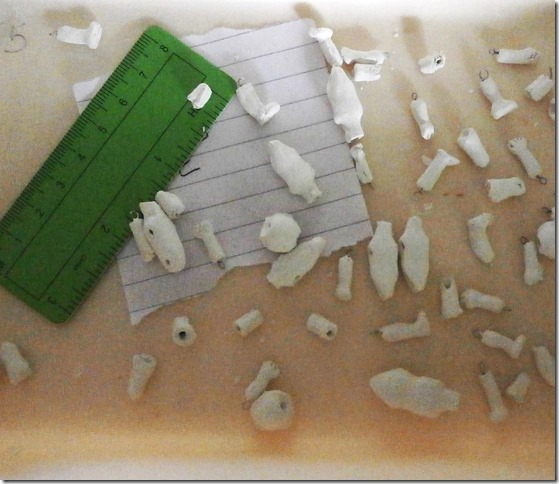 Here on my three inch ruler you can see an upper arm, which is quarter of an inch long.  It needs to be uniformly hollow, sufficiently to accommodate the lower arm inside the cavity.  The lower arm also has to be rubbed to a point to go in, but without exposing the wire stringing hook.  Everything is rubbed to about a millimetre or two in thickness.  It is a lengthy process, happily performed seated, and I can only concentrate for about an hour and a half before I begin breaking parts, then I stop for a while.

As it is seven years since I did this, I marvel at my own ability.  I am not charging enough for these dolls, that’s for sure.

I do, however, enjoy doing it.  Perhaps I’m just a masochist. It does make me terribly cold.  Stillness when rubbing parts to a millimetre tolerance, is necessary.  You can’t do it jiggling about.  You have to get into a meditative state; if your mind wanders to things that make you annoyed, you break the castings faster.

I’ll let you know when I get on to the next bit, meanwhile I’ll make sure I don’t rub anyone up the wrong way.

This entry was posted in About artists. and tagged porcelain production. Bookmark the permalink.