A brush with art.

I had forgotten what a joy china painting can be.

First, however, after seven years and major building work, you have to find all that is necessary for the task.  I certainly had everything I needed seven years ago, now where can it all have gone?

I bought a kiln from another artist, many years ago.  It came with the bits and pieces all just piled into an assorted conglomeration of boxes, grocery packaging and disintegrating plastic tubs.  I thought: oh how careless, ill conceived etc. and so forth.  I have now stopped thinking this, because, once I found my stuff, I discovered I had done exactly the same.

China paint never dries.  You mix the powdered colour with a medium, on a glazed surface.  I use old wall tiles that I found on a shelf in the garage when we bought the house. Once on the glazed surface you can leave the mixed paint until next time, provided it is in a sealed container.  I had the most perfect kitchen box with one of those sealed lids.  At least it was perfect seven years ago.  What emerged into the light of day was a stack of tiles surrounded by shards of plastic.

You would not believe how hard it is to find the right size box in a supermarket, even when you take the tile with you.  In the end I bought the wrong size because I had to have something.  China paint will smear itself all over the world unless protected from it.  At home I discovered exactly the right size box, which I had acquired when I sent off for some coloured liquorice (on a desert island I could be happy, as long as it had central heating, paper, a pen, coloured liquorice and, currently, since the surgery, dry cornflakes.  I know, I don’t know why either.)  There was still some liquorice in the box, a problem which I just had to solve.

Then I found my horrible rusty tin of powdered paint and medium.  Except that the medium was now so small it had dried up completely.  And I had a mere mote of brown and dozens of eyebrows to paint.  Fortunately, in another elderly plastic tub I had two paints that would mix to brown and a large medium.  I also found my brushes as they exploded out of a crumbling cardboard box and, unreasonable joy, a packet of new very tiny hair brushes that I had bought somewhere.

There could be no more prevaricating (wondering whether I could still do it.)  I seized a head and began. 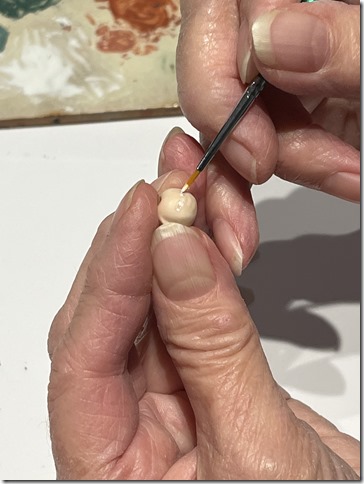 You can see why I was nervous about my ability.  I am painting a face on a head the size of a garden pea.  Here I am painting the whites of the eyes over the previously glazed eyeballs. 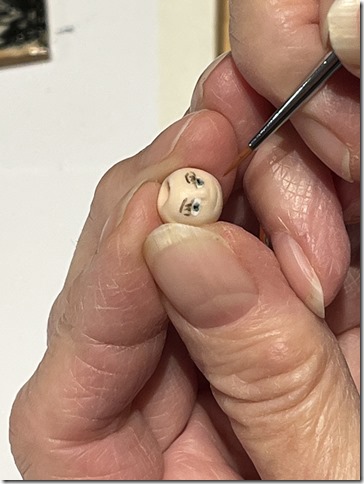 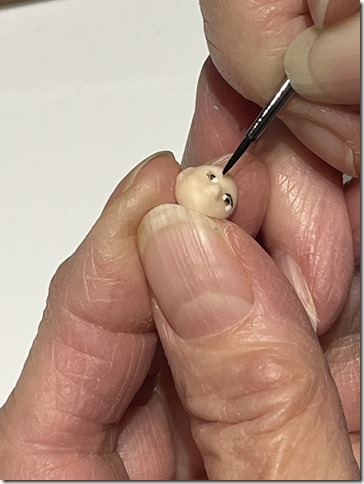 Some heads are smaller than others, part of the problem being how to hold the head to avoid smudging the paint, which is wet until it has been fired.  These heads are the heads of the twenty-fourth scale articulated children.

Finally finished and fired, here they all are. 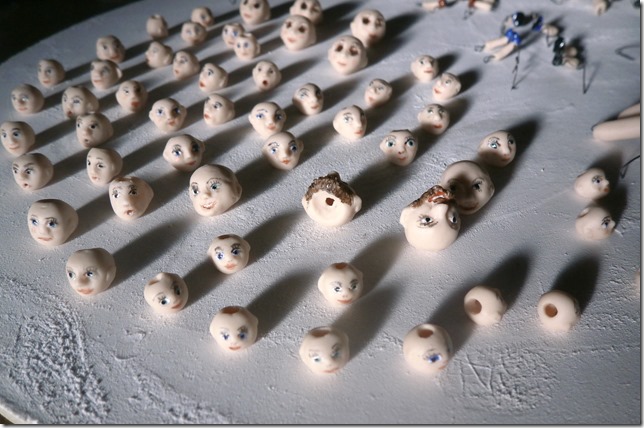 Disembodied heads as far as they eye can see, crikey, it’s the French revolution!

A tiny thing of joy in the sunshine. With permanent colour you can wash, good for hundreds of years.  Such happiness. 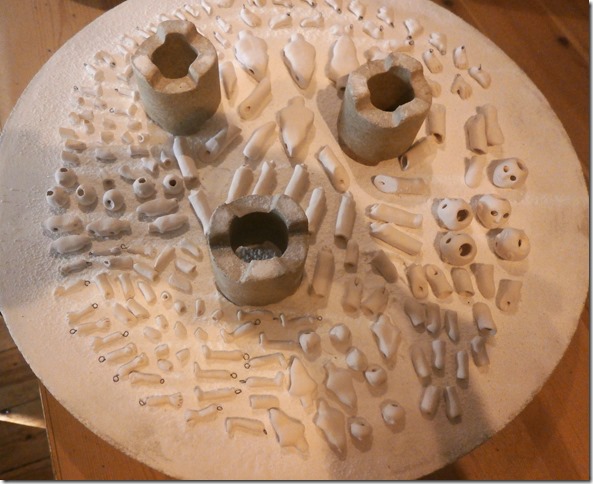 that were all matched up when they came out of the kiln, before I put them all in trays.  Well, they must have been, here I am taking the photographic proof.

Such a joy making weeny dolls and probably good for the memory, too.

This entry was posted in About artists. and tagged china painting porcelain. Bookmark the permalink.