One of the sadnesses at the end of every year is to say our goodbyes to those who will not go into the new year with us.

This year I am sad to say goodbye to two great miniaturists, who died this autumn.

The first was Lawrence St. Ledger, seen at many shows with his wife Angela and so popular at Miniatura my best chance to see what was on his stall was often early in the morning before the visitors arrived.

Lawrence made many exquisite miniatures out of various materials, especially metal, but by far the most popular, the new versions of which were avidly anticipated by collectors, among whom I count myself, were the marvellous miniature automatons.  These, made out of baked bean tins actually worked by means of tiny metal handles on the side. 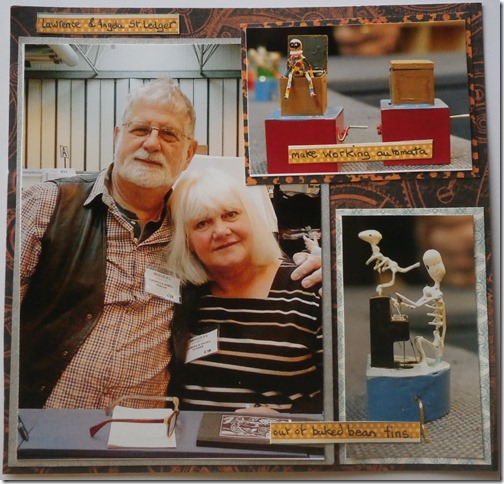 The skeleton played the piano, the harlequin popped out of the box, Elvis jiggled his hips, Wilson Keppel and Betty did the sand dance and many many more.

For a few months before the Min I used to eat baked beans. Lawrence preferred the small tins, so I duly ate, washed and did not crush the tins and bore them in triumph to the show, so that Lawrence could engineer them and Angela paint them and between them produce minute mechanical marvels.

The second goodbye is to the great Terry Curran.  Here he is at Miniatura setting out his stall with the help of his wife, Kay. 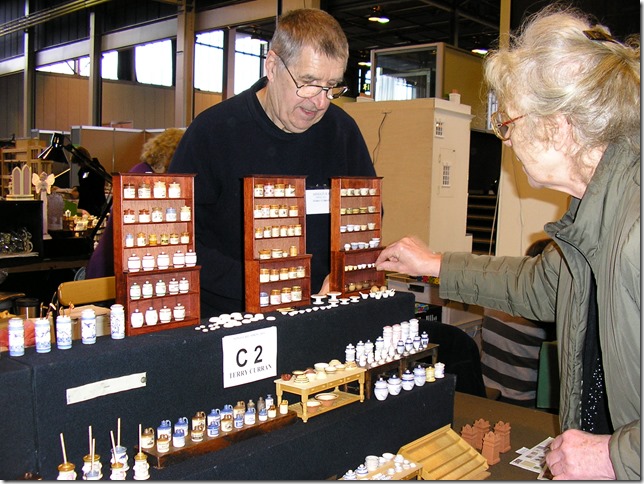 When I call Terry great, this is not just my opinion.  I once visited his house in Sheffield to  buy a kiln from him.  Terry showed me a coffee table book of great British Potters of the 20th century.  Terry was in it and, needless to say, the only potter to be featured working in miniature.  His lidded apothecary jars, which you can see on the shelf below Kay’s hand, were ripped off, so good they were taken to the far East and copied, with the lids stuck on, and sold world wide.  Terry was very annoyed, it’s just the sort of accolade you don’t want but it does prove that anyone could see how perfect his pots were.  He inscribed love notes to his wife with a pin, on the bottom, inside, of every pot.  He laughed and said no one would every know unless they broke the pot.  If you have one of Terry’s pots, don’t break it, you’ll never get another, but I promise you Kay is in there.

If you visit Miniatura, in the spring, keep an eye out for craftsmen and women with world class skills using them to make marvels for collectors in miniature.  If either of these craftsmen had been working in full size, they would, without a shadow of a doubt, be famous and their work in major museums world wide.  Both exceptionally modest people, they just put out their wares at the Min and sold them to collectors for pocket money prices. 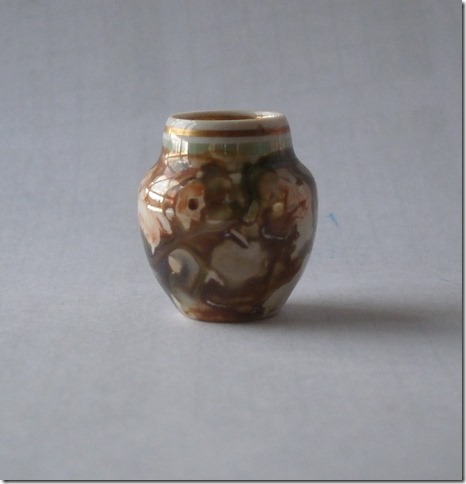 This is the essence of the hobby, and why I love it and love the people who make tiny things with consummate skill and great love.

This entry was posted in About artists. and tagged Lawrence St Leger, Terry Curran. Bookmark the permalink.