It took me nearly all of yesterday to do this. 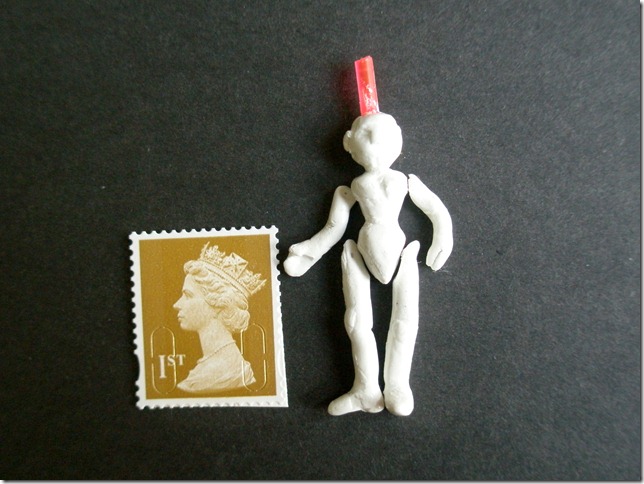 And also 18 years of sculpting practice.

Doesn’t look much, does it?  I’ve put the postage stamp there so you can have a look at one and see how small this is.  That pole sticking out of her head, poor thing, is actually a cocktail stick.  It took me some time to devise this method of handling the malleable clay.  When you have sculpted a cracking face nothing is quite as disheartening as carefully shaping the leg attachment area and even more carefully placing the finished sculpt on a tissue (to avoid flat bottom syndrome) only to find you’ve been holding it by the head, which is now a squished lump.  Back to the drawing board.

I’ve been sculpting in white, fine finish Milliput.  I usually use the standard yellow grey and I can now think really well in that colour.  However, in tiny sizes, a marginal fluffiness can be detected on the surface, whereas the white is absolutely smooth.  I feel it has very slight handling differences; it’s stickier and a bit harder.  There is about an hour of perfect handling after mixing.  After first mixing (in this case no more than a half inch of each stick of this two part epoxy putty for tiny models) the material is quite soft.  I make my initial shape, say the body round the cocktail stick, checking all the sizes and proportions.  The torso and head here are just over three quarters of an inch tall.  At this stage the mixture is soft and doesn’t want to stick to the stick but would love to stick to your fingers so after about half an hour, when the shape is bearable, you have to go away and do something else.  I used to model two at once but that’s difficult to do with a good result because you have to live the person in your head to get character into the sculpt.  There just doesn’t seem to be room in my head for two people at once.  Not with all the other stuff that’s in there. (The earth is a giant gem machine hurtling through space at 67 thousand miles an hour with diamonds crystallising out of the rock filling old volcanic shafts, called Kimberlite pipes as we go.  Except in Australia where they’re called Lamproite pipes and come out sideways.  Even the ground in Australia was pretty.  This bit was on the far side of Sydney Harbour.) 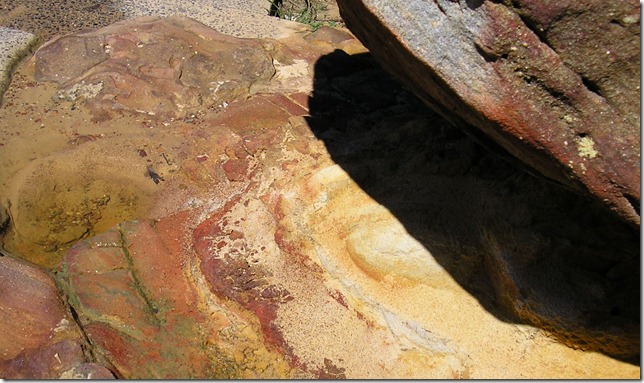 Back to the dolls sculpt.  Exactly half an hour later I’m back to do the details of the torso, the finishing of the face and the ears.  Then I at once mix up fresh Milliput for the legs.  In this size getting two rolls of clay identically sized to the millimetre is a work of art in itself as is bending up an identical amount for the feet.

The symmetry of bodies is a question that has puzzled artists for decades because beauty lies in near symmetry.  Absolute symmetry is spooky in the extreme.  If you doubt this put a hand mirror on half a photo of a face, so you have a face of two halves.  Horrible!

Nevertheless legs of two different lengths are not desirable, unless you live in a very hilly area.  So about three quarters of an hour will get them identical and as roughly shaped as the softness of the Milliput will allow.  Half an hour off (I watered the plants in the garden and sowed more lettuce seed) and the legs were ready to refine, by this time the body is firm enough to ensure the leg attachment marries up and that the doll will stand with the legs at the correct angle to be able to stick to the floor by the feet (because a lot of quarter scalers do that) without suddenly pivoting at the hips to inspect the floor closely.  I haven’t found a way of modelling legs and not holding them somewhere, so after I added identical knees and heels to the shoes I spent another half hour getting rid of the finger nail marks.  This is entertaining. You pick up the leg and smooth off the fingernail mark with your scalpel and half a drip of water.  Then you put it down and pick up a tissue to mop up the gallons of water, then you need more water to smooth out the mark where you picked it up to find the previous mark. Then when you put it down on a tissue, you notice another mark, so you pick it up making a mark…………….

The hands and arms are perhaps the hardest because they are the most fragile.  If I sculpt separate fingers at this stage they will pull off in the mould but they do need to be suggested in case I get clever enough to find a way of making them in the clay and not destroying them utterly when I rub the finished demoulded porcelain down.  If I make the wrists too thin the hands will break off every time in a ‘tear along the dotted line’ sort of way. The arms have to look realistically positioned but have to be far enough away from the  body to make dressing a possibility.

It all came to bits a bit when I varnished the hardened sculpts to make it possible to take a mould without the sculpt disintegrating; I lost a lot of the detail.  At this size, resculpting each part in the wet clay is tricky to say the least; if it’s hard in Milliput, it’s ten times worse in porcelain.

As you’ll have noticed, this is a solid porcelain, legs and arms go up and down type of doll.  I’ve already done these in the 2 inch dolls that are in the shop. 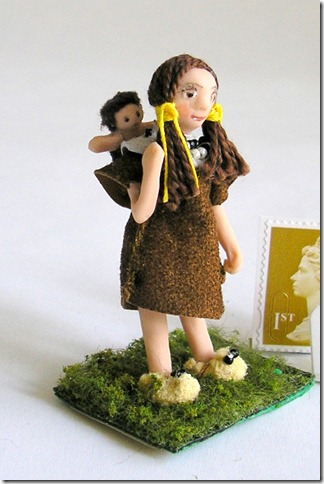 But the 48th scale dolls will be only three quarters of this size at most and some of them are going to be flexible.

Which is what I spent the remaining hour of the day messing around with.