My visit to Gem Day preview at QVC 1

I went on Thursday, it is Saturday when I’m writing this and I’m still beside myself with excitement.

I would love to tell you that like the seasoned journalist I am I sensibly recorded and photographed everything. I was doing quite well until I met the people, whereupon, utterly star struck, I behaved like a complete tourist and forced utter strangers to take my photo with them.

You will not see the photos.  Unless you come round to my house, (don’t) because they’ll be in a photo album entitled ‘Starry people meet hobbit Jane.’  I looked more hobbit like than usual because the rain started the second we were waiting for the train and didn’t let up, including genuine thunder and lightening, until the following day.  I have no idea why I bothered to get my hair permed, the minute we stepped out of Marylebone station it was flat as a pancake.

I cannot begin to tell you which I loved the most, the jewellery, the people or the whole of QVC, because it was all of them.

We started the day with a surprise adventure.  Out of the station and through the monsoon into a taxi, we had only just parked our London derrieres on the seat when my husband discovered a dropped wallet full of plastic cards.  As we were starving we went to the Victoria and Albert museum for lunch anyway, as planned, and examining the cards discovered they belonged to a young lady barrister, working in the city.  Fortunately the name of her chambers was on a card, so my husband rang, spoke to a secretary and as soon as he’d finished eating headed off there in a taxi to deliver the cards.

Left alone in the V&A I had a wonderful time in half of it, bottom floor, 17th and 18th century social history.  I met Lord and Lady Clapham!  (And utterly failed to photograph them, sorry.)  These famous 17th century dolls, who have inspired numerous copies by me and others, are very much better in person than they are in photos.  The modelling of the carved faces is considerably more subtle than appears to be the case in photos and the proportions of the heads to bodies is more endearing than you can imagine.  I am now going to go back to the 17th century and do another version of them, this time with knees and elbows so they can sit in chairs.  I might do wrists as well; the hands, inspired at the time by the invention of forks, as described by Pepys, were wonderful.  I had to restrain myself from picking up the entire display case and cuddling it.

I did restrain myself, however, at least until I got to QVC, when I unaccountably started hugging everyone in sight.  So sad, in a woman of my age.  On the other hand they should be glad I didn’t just lick them all over. I wanted to.  And how I stopped myself licking the jewellery, I shall never know.  (There is one item I need to possess just so that I can.  I’ll wash it afterwards and then photograph it for you.  It was gorgeous, it was fabulous, it was more money than I have, I just have to have it. It was a real miniature work of art disguised as a piece of jewellery.  Keep reading, I’ll show you it from a distance at the end.)

My husband returned from his good deed, fortunately the secretary had been authorised to pay for his taxis and a bit extra, which was appreciated.  We did a little bit of the Chinese exhibit together, I cleaned my teeth in the ladies room and then set off for QVC!

QVC Towers is an impressive building.  It is not small. 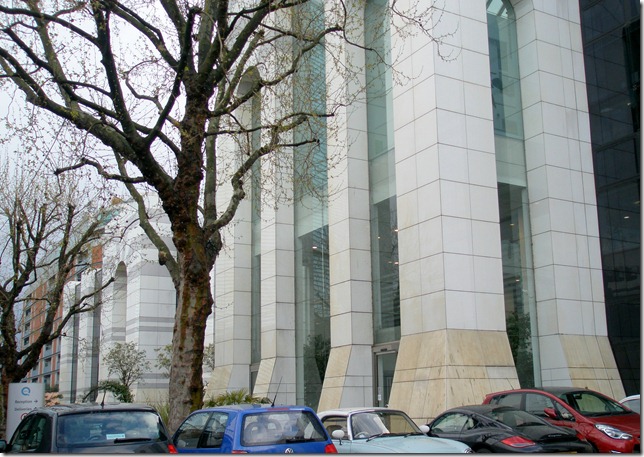 It looks very swish until you turn around and see the Docklands railway running past the other side of the car park! 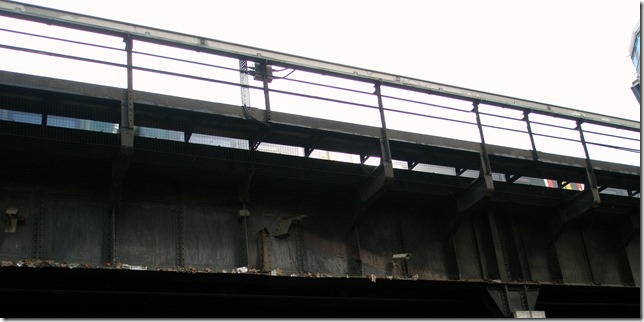 Shall we go in? 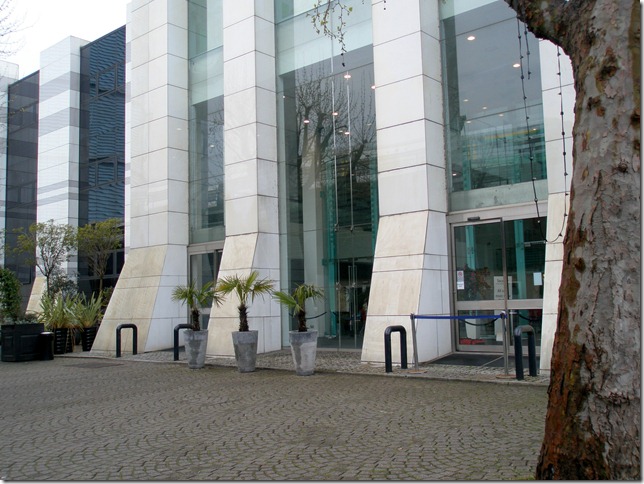 I was a little bit early but so was everyone else. 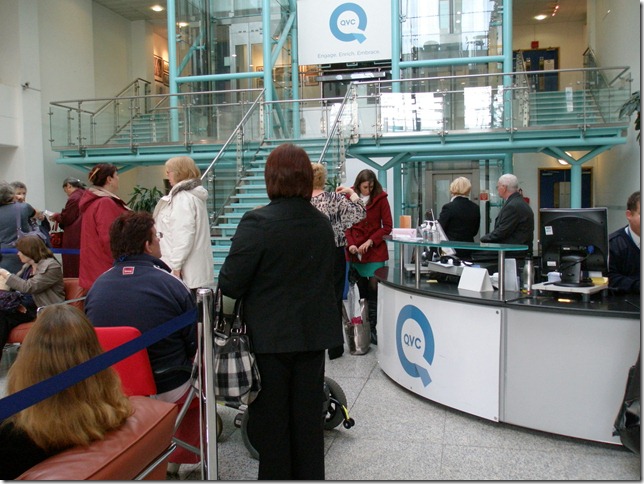 The foyer was light, airy and full of customers, looking just like me.  Please take note of how very normal and assorted everyone looks. 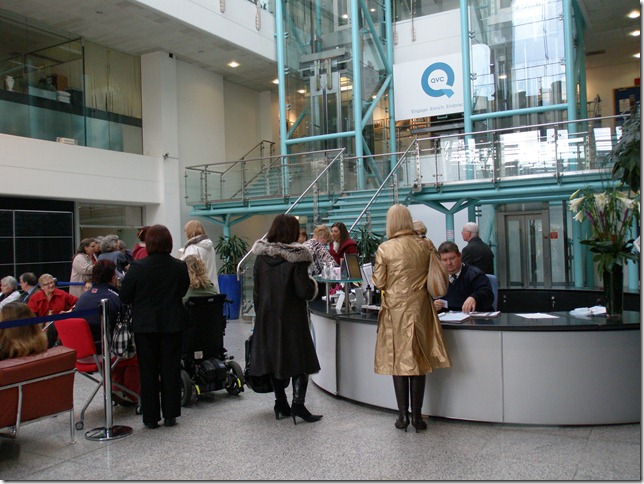 This is worth remembering because when we get to the models and the presenters, they are, without a doubt, verging on the superhuman.

I once saw Paul Daniels, television magician and his wife, Debbie, walking through Warwick town centre.  They both had a sort of glow that was more than out of season suntan, as if they had swallowed an entire tube of that toothpaste that gives you inner sparkle.  They walked as if they were special.

There is something genuine fame confers on people, which is instantly recognisable.  I think when enough other people know you, you begin to believe in yourself as well and to reflect back the self belief in a aura, of sorts.  When I saw the Beatles at the Sunderland Empire they were giving off waves of such energy you could have toasted bread on them.

As you know, I do know many famous miniaturists and artisans working in miniature, including those whose work has been seen by or presented to heads of state, which is probably as famous as a miniature artisan gets to be.  None of them glowed, or gave off any special aura at all, even though what they do is arguably more valuable and of more lasting merit than doing a magic trick, or showing what someone else has made.  I find this interesting because you would think that someone who has made an acknowledged work of art would have enough of an opinion of themselves, if not to radiate energy, at least to glow about 20 or 30 watts.  They don’t.  Perhaps it’s because so much of what an artist does to make something involves shaving chunks off your thumb with a scalpel, sticking needles in your fingers, falling asleep with a paintbrush up your nose or sanding off your fingernails with a lathe.  By the time you’ve finished the masterpiece what’s left of you is heartily sick of it and, of course, by then you wish you’d done it differently and all you can see are the flaws.

Which is why there are models and presenters.

I did get to see, meet, talk to and hug that girl from West Bridgford who is 100%, genuinely, exactly as you see her on screen. 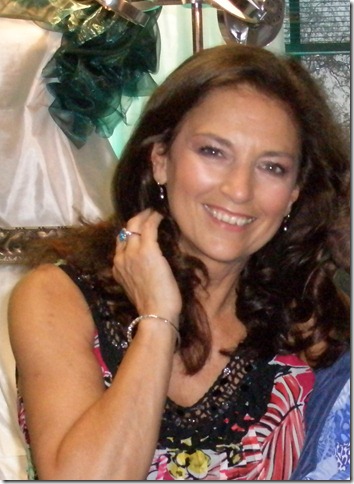 The corner of a massive blue clad bosom in the corner of the picture is mine and is quite as much of me as you’re going to see here.

I’m going to post again about this at the start of the week because there is so much to tell you.  The jewellery, which is why I was there, was such a tour de force.  The craftsmanship, artistry, immensely collectable rarities and sheer quality of the work on display was wonderful.  By the time I’d met people and listened to presentations I only had an hour to see everything. You’d think, with twenty years of covering miniature art shows under my belt, I’d have made a better fist of it, but I didn’t.  I ran from table to table gawping and I wanted the lot.

The item I have to find a way of owning (what can I sell – my husband?  The cats?) is in this picture. 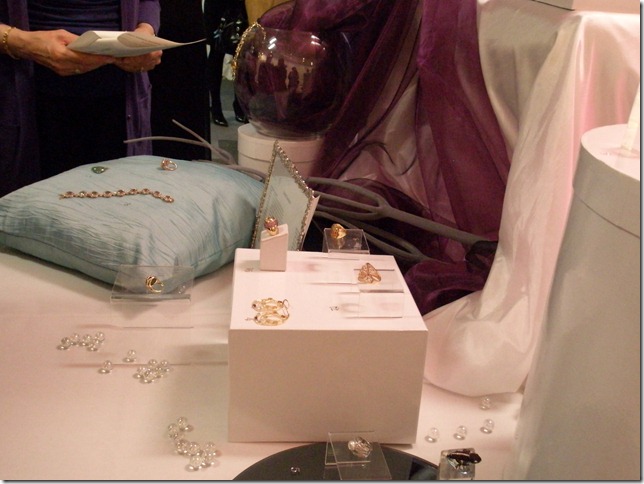 This is the display of Grand Designs.  Aptly named, I definitely have designs on it.

More from me tomorrow.  The show is on www.qvcuk.com for the whole of Tuesday.  You can watch QVC live online by selecting to do so on their website; if you love jewellery, miniature works of art and beautiful things that you too can own, Tuesday is unmissable.  I’ve seen it all and I’ll be glued to a screen with bells on, gosh it is going to be good.

JaneLaverick.com – feeling the love of the art.

This entry was posted in About artists. and tagged jewellery, QVC. Bookmark the permalink.