According to the new revamped show website www.Miniatura.co.uk  435 people ‘like’ Miniatura on the show’s Facebook page.  In general terms, however, this is a big fat lie because I know for a fact that thousands and thousands of people like Miniatura and dozens of hundreds utterly adore it.

A lot from me of late has not been heard; I’m getting ready for it.  There is going to be an entire new product to celebrate my twenty years in business.  You might be able to guess what it is by looking at the entry under the new category of ‘Things to make and Do.’  I have miniaturised the 3D paper reliefs I thought of for the Milliput website and made them as dimensional pictures for dolls’ houses and collectors.

More of them in time, so far I have sculpted 14 pictures, which makes a change from painting them, though I will have to paint them when I’ve made them in paper.  I really do love sculpture.  I would say I could do it all day long but usually four pictures or artefacts in a day, or four doll limbs is my limit, after that I’m all sculpted out.

Having said which, on Friday I was on a roll and managed six things one after another.  I got up with great enthusiasm on Saturday and only did one, though it was a good one.  Sunday was somewhat stymied by having to clear the table for the Sunday lunch.  I bet Barbara Hepworth never had to clear the studio floor so she could serve dinner on it.  It’s very annoying when the creativity is in full flood.  It’s probably equally annoying for the family, who have become used to eating carefully so they don’t splash the piles of art with gravy.  It also means that I never, well not often, get into that situation where I have worked myself into a tiny corner of the table because everywhere else is full.  Thank goodness I have spent enough of the last twenty years interviewing people to know that this is normal in art.  The very best stuff gets done on the edge of the table when you have got a head of steam up, or, even, in some extreme cases, on a tray on a lap sitting in the last chair left without a heap of junk on it.  I have visited miniaturists in what is left of their homes.  Worst off, possibly, are the house builders, who have wood everywhere. I did meet a famous wood turner who had a bedroom up to the ceiling with tree trunks that people had given him.  I have never visited a haberdasher, though I have heard tales of bed legs that will not reach the floor because of the rolls of fabric under the bed.  I interviewed a famous glass blower who opined, ‘You have to clear up eventually because you don’t want to be walking on too much broken glass, Jane.’

Notice he thought it was perfectly OK to be walking on some broken glass.  This is the thing about artists and miniaturists in particular, it’s not so much the end product which is notable, it’s the starting mindset.

My mindset now needs to get its head round some moulds.  If yours is now at Miniatures you can find all you need to know at www.Miniatura.co.uk including a new photo gallery of exhibitors, which includes me, looking like this: 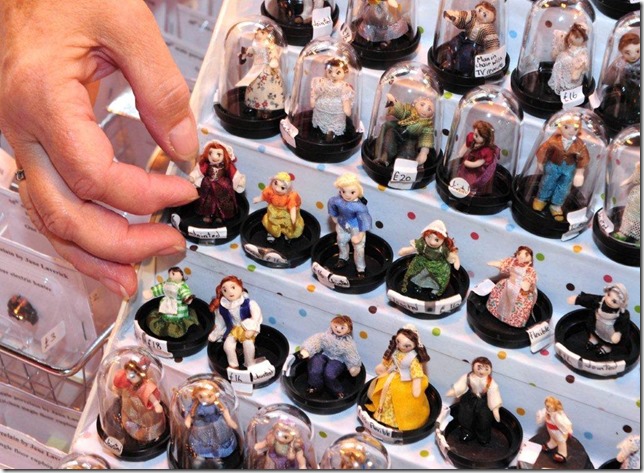 It’s my actual hand, really and some of the 48th scale dolls, including the one with the flexible arm, who I’m making wave at you.

I am now going to go all mouldy, I’ll show you the results when I have some.

This entry was posted in Miniatura and tagged Miniatura, miniature art, miniatures. Bookmark the permalink.