When commuting fifty miles on a regular basis, it is a matter of months before one stops noticing the weather, the traffic flow and the road works and starts noticing more esoteric matters.

I first noticed the lay-by clowns quite close to home, however, at the huge roundabout where the road leads North to Birmingham, South to London and in every other direction to everywhere else.  On the far side of the roundabout, either coming from, or going to everywhere else there are lay-bys, or, if you prefer, lie bays.  Vacant bits of road at the side of the road, with nothing in them.

Except that there wasn’t nothing in them.  They were not remarkable for the absence of a double negative inspection van, the unremarked not turning up of estate cars, in an estate of abandonment, or even the emptiness of the last chance saloon of saloon cars.

In fact the lay-bys were full of apparently abandoned vehicular traffic, all on the road to nowhere.  Parked.  In short.  For a long time.

Unlike many commuters, we were commuting at random times of day, entirely dictated by the mathematical equation of who got into the bathroom first X 3 divided by how late the last person got to bed plus or minus how right my hair went first time, whether the lenses went in in focus or covered in bits of fluff, all over: how charged the toothbrush was, or not, to the cube root of hurry up we are going to be late.

So we set off any jolly old time; the abandoned cars were still there.  Abandoned.

Where were the drivers?

I began to look.

Were they, for example, picking flowers on the roundabout?

I scoured the giant roundabout with pin sharp squinty eyes behind sunglasses endeavouring to spot the pinstripe suited business man out of his company car and up one of the stunted grimy trees on the roundabout.  I thought he might have a little bunch of early blossom clutched in his sweaty fist.  I imagined him shouting down to his second in command, over the roar of the traffic: Will it look better in the boardroom if I get some leaves to go with it as well?  Can you remember how big the vase is?

Either I didn’t spot him or he had been run over in any one of the five lanes of traffic he had to cross to get to the miniature wood with the stunted black trees.

On the way back I looked for the second in command, prostrate and grieving over the mangled corpse in the lay-by near the car, crying: It was attention to detail that killed him!  We could have made do with the trophy we won at Expo 93, same as always!  We could have had daisies but it had to be tree flowers, he was so aspirational!

But there he wasn’t every time.

They did look mostly like middle to very bottom of the range company cars.  Sixteen previous careful owners.  Often there were several of them on both sides of the road.

On the other side of the roundabout, on the way into the town is a very posh hotel.  I began to wonder if they were slipping in for a coffee or something stronger, without wishing to leave their company car in the car park of the hotel in case they got spotted and reported.  I was convinced that was the deal for several weeks.  The truth came to me in a flash one sleepless night, via a lurid novel I had downloaded on my Kindle by mistake.

I could see it all in thrilling imagined technicolour.

In fact it got so lurid after several weeks I had to stop because I was misting the windows up as we were going round the roundabout.  We ended up in the wrong lane once and had to go via Stratford, which is miles out of the way.

Besides, given the randomness of our drive-past both two and fro on any day of the week, there was a massive mathematical possibility that on one occasion, at least, I was going to spot someone weaving their way through the traffic, or hovering, wavering, by the traffic lights, ready for the run, their little beige car coat and big beige comb-over flapping in the tail wind of a thundering lorry, fear and desire writ large on their grime-streaked hopeful little face.

On late returns I even scoured the empty road for flat ones.

My other half (driving) and I began to debate.

Who would do such a thing?  Which class of society would leave random, fairly tatty vehicles, abandoned in lay-bys outside a town, next to a motorway in a place with not even a footpath to anywhere else near at hand (or foot) and at least three lanes of really fast traffic to cross to get anywhere?

The idea of the International Suicide Club only lasted a few trips as did the Terrorist Bombers Practice Class first grade Chicken and Road Group.  There would have been evidence, surely.  Skin and hair on the central reservation, damp undergarmentry left in the bushes, a gym shoe dangling off the traffic light the way you find a toddler’s mitt on a garden wall.

In the early commuting days we awaited the first school holiday with interest.  We live on a main road, the difference school holidays make to the traffic is extraordinary.  We believe all five year olds must have their own cars these days.

If they do, in lay-bys school holidays are not observed.  We stayed over for Christmas.  When we returned, there they were.

As ever, parked cars.

Lots of cars parked in the lay-by near the motorway roundabout.

What section of society is so hated, so despised, so marginalised that it cannot be seen in a town?

Who can there be so loathed, by everyone, that they must park and meet not in a town, not in a village, not in a countryside beauty spot, not even in a proper car park but in a horrible motorway roundabout lay-by with the traffic thundering past.

Who congregates with tarmac and gravel?

Who goes to places devoid of normal people to be with their own kind?

Who would I hate to meet anywhere normal?  Who needs to see others of their kind and yet remain invisible to the rest of us to feel normal themselves?

Like whales off the coast of somewhere or other, like gophers in the rough on the golf course, like spiders under the stairs!  Like David Attenborough, spotting a hitherto undisclosed natural phenomenon and mass migration, or parking, I clapped my hand to my forehead shouting:  Stone me!  You fool!  It’s obvious!

Of course!  How far would you go to avoid one?  How much further would you run to avoid two?  Three, four, five at once.  There isn’t a helicopter fast enough to get you out of there.

Yet, shunned by society, they must perforce meet, for if they breed not the entire species would die out.  I’d be happy but they, probably, would not.

Who else would leave a nine owner Ford Cortina in a lay-by all day but some sort of clown?  It wasn’t worth ticketting, nicking or smashing into and no joy could possibly be evinced from riding it.  The soft top Mittel European boxy job next to it was worse and the two-seater Spanish import on the end of the row was due to bio degrade, possibly that afternoon.

I began to look for the clowns.

Next to the road was a sizeable field.  The owner of it was growing grey grass and weeds of random length.  I began to sit as far up in my seat as I could as we came round the about to spot the clowns cavorting in the field as we passed.  On the other side of the road a little way away, was a brook, perfect for washing off pies in.  It was spanned by a pretty five arched bridge, absolutely the thing for dallying under in dalliance and huge damp trousers.  Next to it was a little water meadow exhilarating to splash through with massive shoes.

I pictured them leaning off the little bridge, laughing merrily as they filled each other’s trousers with custard and poured jelly on the exploding hair of those with under-bridge assignations.

In my mind’s eye she-clowns and he-clowns pranced hand in three fingered glove down the country lanes away from prying eyes.  I imagined the new initiate to the great secret, parking up in great trepidation, getting out, slamming the door and then picking it up and putting it in the back seat. Re-rogueing his nose in the dangling wing mirror and having a quick squirt of windscreen wiper water before setting off in flapping steps into the meadow.  There among the industrially-grimed elephant grass he catches his first glimpse of a pink striped bowler hat and ducks the first spherical Comedy Christmas pudding.  With his heart quickening he dashes forward, feet flailing in the tail-wind of a passing pantechnicon, to trip on an artfully placed banana skin into a capacious plastic paddling pool of purple goo.  Rising, like Venus from the gunk, grinning from ear to ear in White Panstick and Red no. 3, he is surrounded by fellow sufferers, honking, squirting and pie-ing in a magnificent massed display of utter stupidity.

So convinced was I, I even looked along the verges for the children, expecting to see them grouped, like frilled starlings with small pointed pom pomed white hats, perched on the metal barriers that ringed the fabled field of feral fircus folk.  I searched for giant wheelbarrows among the parked cars and hoped for see-saws between the saloons.

I was so sure.

It made such sense, I was surprised not to have clocked a clown months ago.

Then my husband went and asked Pog, who has his own lorry and Pog said it was reps car sharing.  They park in lay-bys near motorways close to towns and car share from there into the towns, so they only have to pay one daily rate in the expensive car parks in the towns where they go to peddle the wares of their companies to other businesses.  They take it in turns to pick each other up and pay for the parking.  Said Pog.

Some people have no romance in their souls at all. 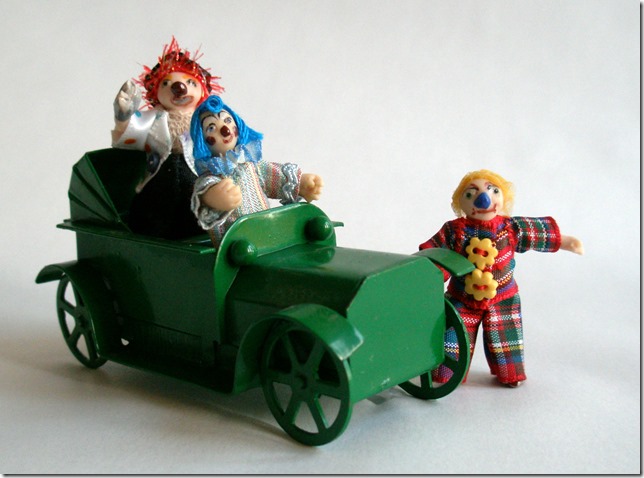 However David Attenborough and I, we watch, we wait, we see what is there.

And, in my case, sometimes not.

JaneLaverick.com – are we nearly there yet?

This entry was posted in The parrot has landed. and tagged clowns, David Attenborough, humour, lay-bys. Bookmark the permalink.