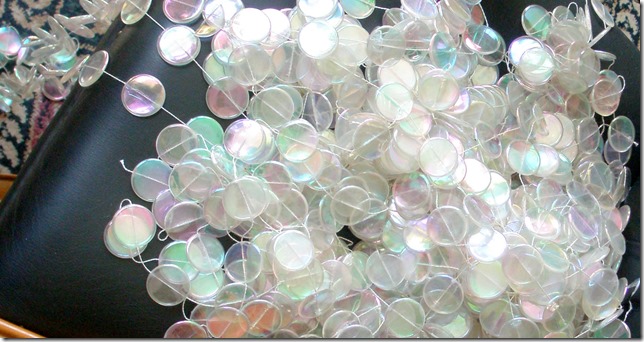 Taking care of someone elderly and demented is a riveting process of lurching from panic to crisis and back again.

Take, for example, last Thursday, where I directed a panic by telephone, about every half hour.  If you have ever had a go with one of those little remote control cars, where a tentative, tiny, gentle push on the little lever of the handset instantly sends the car hurtling towards a brick wall, then up the wall then across the ceiling at breakneck speed until it suddenly notices gravity and falls off, downwards onto the outstretched arm and cup of tea of a bystander, which cup then crashes onto a glass coffee table, breaking everything and creating a tidal wave of tea, then you have a slight idea of the chaos, except it was much worse and everyone involved is now feeling very delicate, a day later and in need of a week off (which will not happen, not now, not ever.)

It started with a phone call from the carer, who has been tracking medication consumption by my mother for a couple of weeks, at my request.

She had noticed that the remainder of the week’s supply of pills had vanished.  Cautiously juxtapositioning this with the interesting fact that my mother seemed to be so far round the bend that she was located in the distance and waving erratically, the carer wondered if the patient had just taken all the pills at once.  She suggested on the phone that a doctor be summoned, with which suggestion I heartily agreed.

One of the things I have found the care agency to be very good at is getting a member of the medical profession to the house with reasonable speed.  I have no idea how they do this; it’s a very good trick.

So I next spoke to my mother, who was busy being quite insulted that someone was mentioning she had hardening of the arteries because she was simply waiting for the men to come so she could prepare the dinner party, though she had no idea what to give everyone as it was so hot, so she’d decided just to give them little bits of bacon and had no time to talk to me as it was going to take quite a while to cut packs of bacon into quarter inch squares.

Within the hour I was talking to a doctor who had taken approximately five seconds to decide that my mother had no capacity in any direction and needed to be in a hospital ASAP. I agreed, we had a happy chat, with laughter and merry quips; I thanked the doctor profusely for her attendance and she left.

I then spoke to the carer, who sounded relieved, but only on the level of Mafeking and then spoke to my mother again who was now very cross that her house was being used for interviews, she was quite certain her father would be annoyed about it when he came home.  There was quite a lot of very aggressive chat about words being bandied about on the subject of hardened arteries, which she, for one, certainly did not have and was prepared to deal harshly with anyone who might suggest she did have.  I spoke to the carer again and then made a cup of tea for myself and sat down, just to stop shaking, for a nice change.

Why on earth didn’t I just jump in the car and pop across the fifty miles to my mother?  Good question, I wondered if you’d spot that.  I was less than 24 hours out of a general anaesthetic myself and had been told by my hospital not to go charging off anywhere, at all.  As I was in considerable pain and still woozy, I considered this to be good advice.  After all, I reasoned, when my husband had been County Emergency Planning Officer for 15 years, he had supervised every crisis: floods, pestilence and terrorism included, by telephone, having done the groundwork previously, during the calm bit.  I, apart from being slightly anaesthetised, bleeding like a stuck pig and in crippling pain, was in the same position.

And so it continued, as before.  Every half hour I spoke to the care worker, who was utterly heroic and stayed, despite my mother, to help my mother, and had to be prevailed upon, after several hours, to make herself a sandwich so she didn’t keel over from hunger.  Every hour I spoke to my mother, who was increasingly aggressive and in between spoke to my mother’s lovely neighbour, who had seen the doctor arrive and was concerned.  As all of this happened in the middle of a heat wave so exceptional that people were dropping like flies, so my mother kept getting demoted behind others having actual heart attacks, rather than potential overdoses or strokes.  As the situation continued, friends, family, people ringing the house and speaking to the bacon cutter and others joined in, until each hour between talking to my mother was filled with taking phone calls from worried friends.  My mother, after a few hours, had turned into a student, sitting her finals and I was so tired and in such pain I was glad that at least one of the ten or so folk involved in the crisis was feeling young and fresh, even if she hadn’t done enough swotting.

It always amazes me that people are surprised when someone with dementia sounds demented.  ‘She isn’t making any sense!’ they declare, affronted, ‘Shouldn’t she be locked up?  Shouldn’t you be there?’  Well, she will, she is demented, you know.  No, she will not be less demented if I am there.  She will be more demented if she is tired or ill and less demented early in the morning and if she is having a good day.  Like any illness, it’s worse if you’re not very well at the time and much worse if you’re knackered.  And, like any illness, you’d feel awful and considerably more ill if taken from your familiar surroundings, where you feel happy and at home and instead locked up in a institution, where you don’t know anyone and you haven’t got your cat and your comfy chair.

But you still have to explain gently to alarmed friends and family, a bit at a time and in terms they can understand, even though now I have learned so much about this illness that doctors routinely enquire if I have a medical background.  The answer is no but I’m acquiring one fairly quickly.

In terms of looking after me, my broken arm taught me to do that first, which is why I resisted all attempts by anyone to get me to the scene and continued to supervise by phone every half hour or more until my mother was safely settled into her hospital ward at three o’clock in the morning.  The brilliant carer didn’t leave my mother’s side until she was installed in her hospital bed and even managed to phone me and tell me which ward before she went to bed herself, which I thought was utterly fabtastic.  Twelve hours of continuous care including antisocial hours will cost several hundred pounds on the monthly bill.  As my father’s will is still in legal process and the money that might be available isn’t yet, as soon as I have recovered myself from the fun and games I will research second mortgages on owned homes and will not begrudge any of it as my mother was cared for as well as I would have done myself in the crisis.

I had planned on sleeping round the clock, except for ringing the hospital at half past eight.  It turned out that my mother had a urinary tract infection, probably the fifth in a year.  These are exacerbated by the fact that she has been taking antibiotics prophylactically for at least forty years, so to shift an infection you have to nuke it intravenously, which the hospital did so effectively that she was out by early afternoon after I’d spoken to the discharge nurse three times and arranged, over several calls, for the care agency to pick her up and take her home. 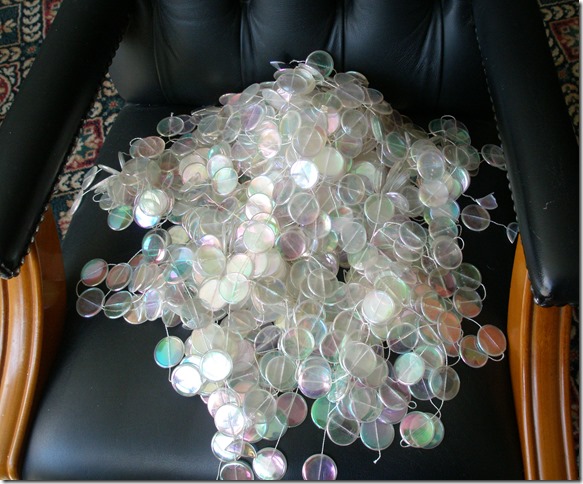 Meanwhile, back at the ranch, the previous night about half past one, as I had removed the plastic pennies bead curtain, which I hang across the door in hot weather, it slid to one side, breaking into a heap of separate but intertwined strings.  I had filled the million minutes waiting for the next awful phone call by endeavouring to unravel the strings, poke them through holes in a bit of cut-down metal tile edging and tie them on.  After the fifth, I stuck them with tape, which was a bit quicker.  I continued for a couple of hours, until I realised I was chuckling happily as I did so, at which point I stopped.

In the morning, after a good five hour’s sleep I looked at the heap and realised I was on the verge of insanity myself.

So I put the plastic pennies in the bin,  stood everyone down by phone at three in the afternoon and then I went to bed.

I was up again by half past, phoned by my mother who continued to ring brightly every half hour to tell me, each time with some surprise, that she’d just got back from a lovely holiday with very nice camp beds and such a lot of holiday makers, many of them far too old to be in a youth hostel.

And the following day being Saturday I got up early to go to my mother’s, for the weekend, as usual. 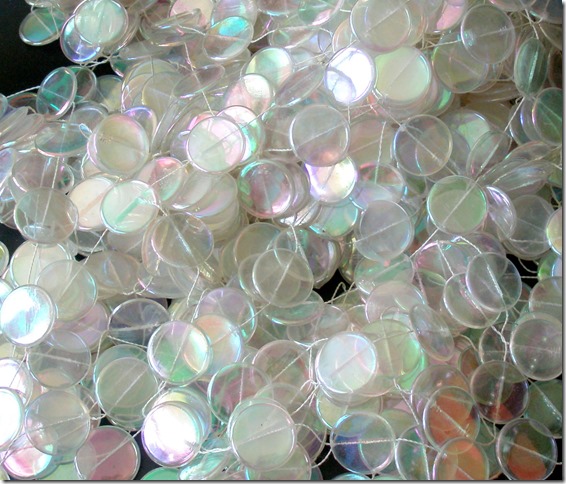 She thought I looked a bit pale and wondered if I was getting enough sleep.

JaneLaverick.com, a full set of chairs, all of them rocking.

This entry was posted in The parrot has landed. and tagged an interesting 24 hours, care agencies, dementia. Bookmark the permalink.