There has been a bit of radio silence from me because I have been sculpting.  It really is the most exhausting thing, if it’s going to be any good.  I cannot do more than four shapes in a day or they start to go all rubbishy.

Having had a good look around at what is available, I think the things that are missing are definitely dolls and also ornaments.  There are quite a few jugs and bowls and other wheel-thrown items available, and the Phoenix metal figurines but not a lot that I can find in the way of ornaments in proper porcelain in this scale.  I decided from the start that they have to fit inside the shelves of the very fine Bespaq bookcase or china cabinet that I showed you last time. 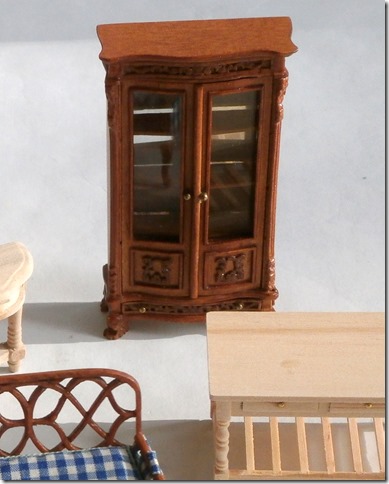 This has a mirrored back, so I think it may be intended to be a china cabinet, rather than a bookcase, because you’ll be able to see the back of anything on the shelf.  The entire cabinet is three and a quarter inches tall and each shelf is less than half an inch, so the ornaments are going to have to be small.  Here are the initial sculpts of the first lot.

They are made in white Milliput, which is, in theory, the finest of the two part epoxy resin sculpting material.  I actually think all colours are all OK in all sizes, possibly the superfine white is marginally less fluffy.  There’s a chap in a hat with his hands in his pockets, a cherub, a Meissen vase, a washstand jug and bowl and a crinoline lady going along the middle row, behind are a pair of vases and a pair of pigs, in front are a pastille burner cottage, a jug with a fox stopper and a pair of cats.

Here are the cottage, the pigs and the cats in closer close-up.

Incidentally if you have been longing for a porcelain ornament in 24th scale and no one makes it, now is the time to say, for the next week I am open to requests, absolutely no guarantees other than saying I will have a go.  I think I may replicate the furry sheep which was always the most popular ornament in 12th scale and fiendishly tricky to make.  Please don’t be shy, I’d rather make things collectors want as just my own strange desires and fancies.  As I’m doing these for a Regency house, my time frame stops round about 1820 but if you have a longing for anything Victorian or twentieth century or even fairy or fantasy, speak up (well, email up.)

It’s difficult to see with a modern camera, just how small these are but if I show you one of the dolls you’ll get the idea. 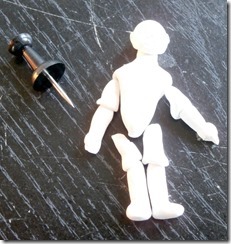 This is a boy.  You can’t see his features because the camera does not love the white Milliput as much as I do but they are there.  He is one of eight new dolls so far, I still have to do old people and babies.

Of course, doing them in Milliput is one thing, translating them into porcelain is quite another and seeing if the jointing, planned to be invisible, will work is another.  This is why they don’t have separate hands and feet. 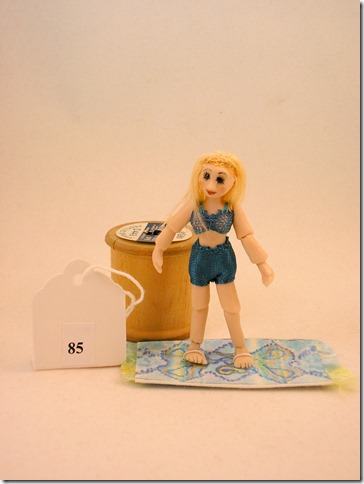 Here is one of the old style, larger, 24th scale glass eyed dolls with the separate hands and feet.  To make these work I have to bury wire loops, which I make, in the hands and feet when the clay is wet.  In the kiln some of the wire loops, which are nearly the same size as the feet or hands, break free as the porcelain fires and shrinks.  I cannot make the loops smaller; their size is dictated by the width of round elastic available.  There is no way of saving hands and feet with metal wires sticking out of them visibly, they have to be chucked.  Some days the wastage rate is awful.

So, as the new dolls are smaller, making the joints with the wires in them at the knees and elbows just gives me a better chance of a lower wastage rate because I can bury the ends of the loops, that anchor them into the porcelain, along the length of the forearm or in the calves.  If it works these will be superman dolls because  they will all have muscles made literally of steel.  Well, when I say steel I actually mean chrome wire but close enough.  Muscles made of chrome just doesn’t have the same ring to it.

Anyway, on with the sculpting.  The most interesting thing about it is that you never know really if it will work until you’ve got it all in the porcelain and sitting on your work table.  Before that I have to make successful moulds that demould the shapes well and I have to have designed shapes that will fire in the kiln without bits dropping off and the whole lot has to be paintable when fired  and the dolls have to go together and all the joints work to give realistic range of movement.

I am going to spend another week sculpting. Mainly because I am in the zone but I could be in the zone and have it all horribly wrong, in which case I have wasted two weeks footling around with little bits of Milliput.

But considering all the time I have wasted sitting in a car commuting fifty miles between one town and another in the last year an a quarter, there are much worse ways to waste your time.

You can see what other artists do with Milliput on the Milliput site www.milliput.co.uk scroll down to case studies and click on that.  You can see the entire room I made of Milliput and some amazing stuff made by real artists.  In a world gone literally mad it’s two little sticks of sanity (and you can mend your gutter with it, I did.)