The benefits of bocage.

The sculpting continues.  I found the photo I took for the last blog helpful because I noticed that the limbs of the doll I showed you were out of proportion and that the washstand jug had the shape of a bird.  Accordingly I took the body and head from the doll and resculpted new arms and legs and took the limbs and resculpted the body and head.  So now I have two dolls where before I had one.  Here’s one of them. 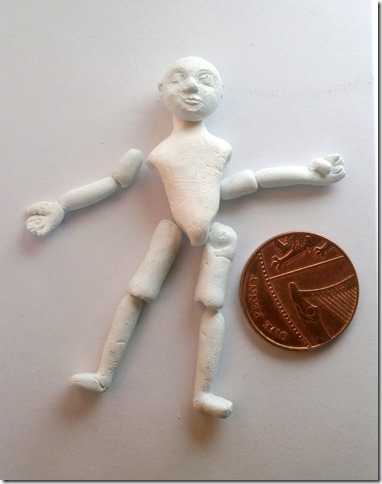 Why am I resculpting? Am I rubbish?  Have I learned nothing in twenty years of doing it?  Yes and no is the answer because the size is the problem.  As you can see from the penny these things are really small, I can see them better with a camera than I can with my eyes. Last post when I said white Milliput was less fluffy, I should perhaps elaborate.  Milliput isn’t fluffy at all for all normal purposes, in fact it’s one of the smoothest modelling compounds I have ever known but when you get this small even spit looks fluffy.  You can smooth Milliput with water to achieve a lovely surface but at the level at which I’m working you can get to the point where you have more water than Milliput, even just from dipping the tiny point of your scalpel into the water and then wiping it off on the back of your hand.  When this happens the sculpture can disintegrate slightly and this is where it goes fluffy.  When that happens your best resource is to leave well alone and come back to it when evaporation has come to the rescue.  If you forget and leave it the fluffiness will settle but you’ll eventually have an uneven surface; you can see it on the top of the right hand eye of the doll as you look at it.  I can either sand this a bit or correct it by varnishing the master, though when I do this I lose detail.

Here’s more detail in the latest batch of ornaments. 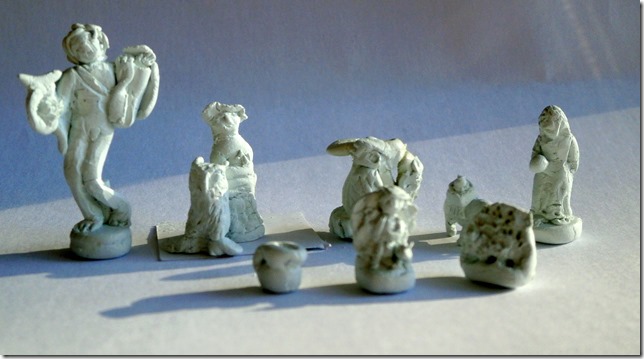 There’s left to right, Orpheus, an owl, a flower seller, the jug turned into a bird, a chap on a wonky howdah on top of an elephant, a woman with a ball.  In the front, a very small jug, a shepherd in a tricorn hat and a sheep with bocage.

Bocage is a wonderful thing.  I think it’s an eighteenth century invention.  In the eighteenth century collectors were mad for porcelain and all the great factories were in full swing and just discovering that you can model a sheep, a cow or anything with legs and it will look great until you try to stand it up in the wet clay.  At this point gravity will assert itself and before your very eyes the wet legs will concertina until the creature is resting its stomach on the base with the legs as little loops out to the side.  It affects Milliput too, Orpheus wasn’t modelled half as effete as he looks with his curvy legs, he was an upright feller striding through Hades in search of Eurydice with just one bent leg, as in striding, until I went to make a cup of tea, when I returned he’d set, all knackered looking, at which point I propped him up with a pillar, another trick employed by sculptors through the ages.

The bocage, a selection of greenery, nameless shrubs and so on, is a handy device employed by sculptors for porcelain over the last three hundred years.  You make this as the base and the back and then model your sheep, shepherd, figures from history or what you fancy and then stick them to the bocage so that the weight of the body is suspended from the background and not resting on the weedy little legs.  In my scale bocage is a blessing.  I have modelled the elephant which is hiding behind the shrubbery without benefit of bocage, which is why the mahout is in such peril.

If you look at Victorian flat backed figures, that were so popular on mantel pieces of the period, you can see that they all have either bocage or a prop with a flat back behind them to prevent the legs collapsing.  It’s not just because the flat bit handily faces the back wall behind the shelf, it’s much more technical than that.  WG Grace has his wicket, Nelson has a capstan and so on.  There’s a very good reason all those Staffordshire dogs are sitting down, even those with separate front legs.  In this case the torso, tail and head are one mould and the front legs are another, demoulded when all the slip has gone leather hard and stuck on with wet clay.  This is why so many figurines of the past have bases too, it’s not just because the sculptors wanted to help you with the dusting without knocking the legs off, it’s so they could make them at all.

You haven’t told me yet if there’s anything you’d like for your house in 24th scale, or even, because it’s the same, in small twelfth scale.  I think I fancy doing dragons next because they are just generally good, also, as they have short mostly bent legs (very like me) they could be entirely bocage free.

It’s quite a phenomenon gravity, it makes you shorter as you age.  Last time I went into hospital I wasn’t horrified at the weight of me (weighed with pockets full of loose change and a handbag) but the height of me (measured with heeled sandals).  Gravity gives you fat ankles as you get older and a lower derriere and it buckles the legs of your sculptures.  It makes glass slowly slide down to the bottom of the window, it makes the water flow downhill (all around a spherical Earth) and it makes your cakes sink if you open the oven halfway.

On the other hand it stops us all floating off into outer space, including the atmosphere; as I’m addicted to breathing, this is a good thing.  Meanwhile if you want to be shorter you could try sleeping standing up or having wet clay legs, either will work eventually.

This entry was posted in 24th scale and tagged sculpting with Milliput. Bookmark the permalink.