The sculpting continues.  I thought I’d try to show you how small the sculptures are.  I have been considering the sorts of figurines I might have a go at and spent the afternoon wandering round local antique markets to see what people really bought in quantity.  There was a plague of crinoline ladies, eighteenth century, Victorian revival and modern nostalgic.  I couldn’t see any Vivienne Westwood mini crinis, perhaps it’s too soon.  I do recall staying with a landlady in Edinburgh who had crinolines in fabric absolutely everywhere.  Crinoline spare toilet roll covers, crinoline lady lampshades, crinoline lady tea cosies, small collectable pottery crinoline ladies and, if you wished to use the telephone, I’ll give you a guess what it was hiding under.  Yes it was, in pink net.

I didn’t see but decided I must do, some of the more hilarious Staffordshire animals.  There was a time when one-upmanship consisted of demonstrating your knowledge of little-known wildlife, by owning a porcelain or pottery rendition of the same.  The problem with this laudable aim was that the factory folk modelling them hadn’t seen them either.  When I was a child we had, passing through, (like everything) a pair of zebras which were actually quite good and supported, not by bocage but by artistically broken tree stumps.  The tendency of zebra in the wild to loiter by the nearest tree stump, leaning on it, a bit, is not something I ever recall David Attenborough speaking about at length, or, indeed, at all.  Perhaps it was an eighteenth century phenomenon.

I also recall seeing in antique shops some really bad zebra, highly unlikely warthogs, slightly suspect sea creatures and some really naff lions.  I think the lion sculptors may have relied on the Tate and Lyle treacle tin depiction, any old illustrated bibles they could find, long forgotten visits to the zoological gardens and then interpreted the results.

What a gift!  So I had to have a go.  I’ve used the preliminary shape of the lion body to show you how I do it.  The problem with things so small is where to hold them.  For this tiny I don’t hold them at all, I stick them to my finger. 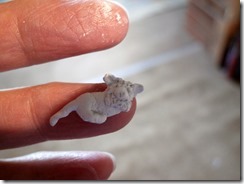 Like that and then use the scalpel in the other hand to do the modelling.  There is a partial, hilarious lion there really, look. 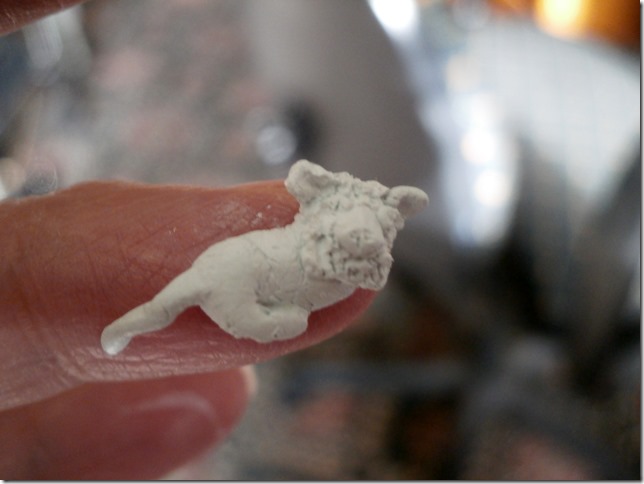 remembering what I told you about the bocage being the prop for the animal, I modelled the bocage and his legs separately and then stuck it all together. 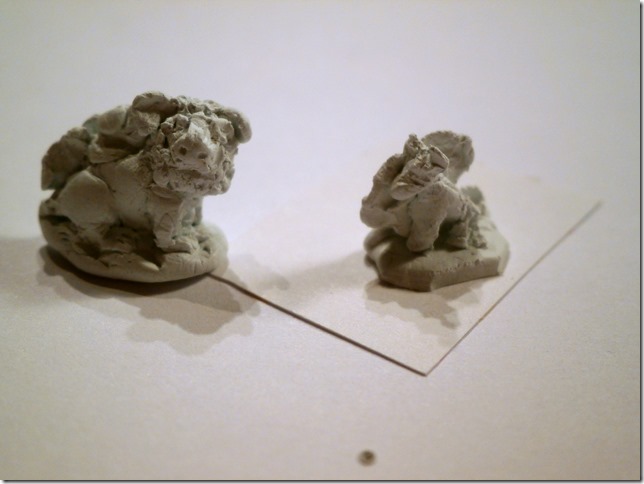 There he is and a dog done by the same method on the right.  It is difficult not to squash anything finished as you assemble it.  I am also modelling with one eye on the mould which isn’t in existence yet, I cannot make undercuts or any piece sticking out which will get knocked off every time I try to remove the clay from the mould, or, worse, never come out of the mould at all.  That is why the wings of the parrot are separate. 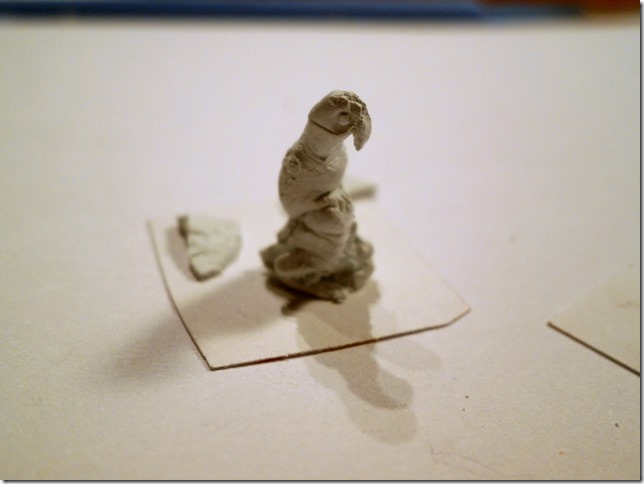 I’ll make one mould for the parrot on the tree stump and another for his wings, which are behind him on the little piece of card.

I did have a go at the dragon.  I was aiming for a fearsome and awe inspiring myth, what I actually got, as it was me, is the pet dragon of the Imperial Empress begging for a biscuit, or, possibly, apologising for a damp patch under the throne.  (So very like the home life of our own dear Queen.) 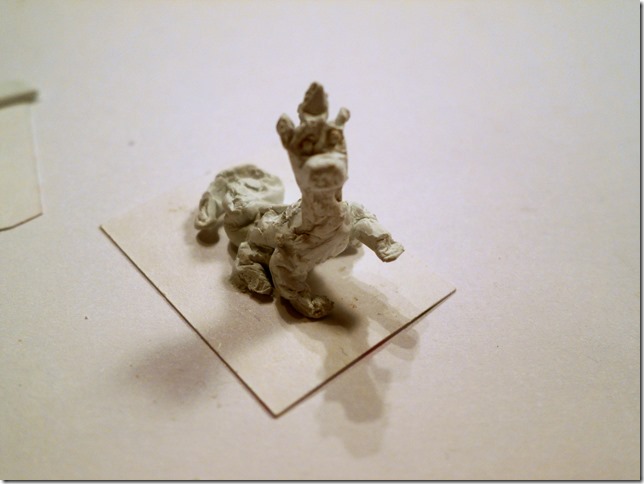 The four new ones are really small.

As is the elephant and his wonky mahout. 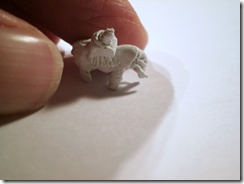 I’m pleased with the size of the dolls, so far.  I didn’t want them massively smaller, just a little bit littler and quite a bit finer.  I think I’m getting there as you can see by this lady. 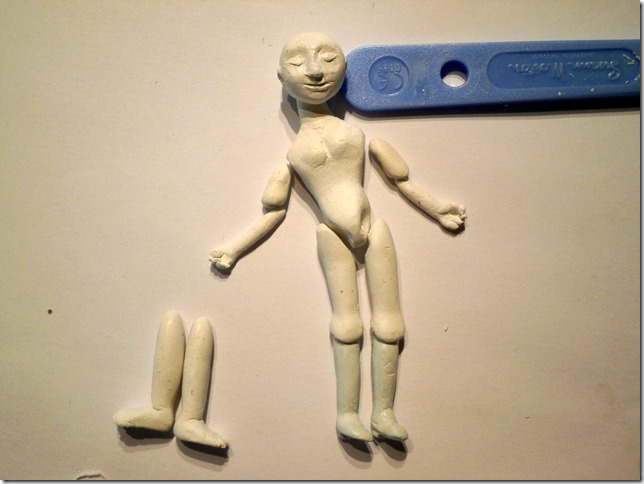 I made her a new pair of calves today with shoe endings.  I intend to offer the dolls undressed and am well aware that some dressers find 24th scale shoes rather daunting, so I’ll try to offer moulded shoes as well as bare feet.  Compared to the jointed glass eyed man and the stuffed –limb lady she is a bit finer.  Bear in mind that every porcelain  piece will shrink by 12% in the kiln, so the whole doll, though it looks the same size as the others will be smaller when fired.

Also, as you can see, the limbs won’t be as lumpy as the bendy ones.  The head does have to be that size, because it will contain the knotted elastic that holds the head on to the strung body.

Having said that, the strung legs do not sit on a chair quite as well as bendy ones and they don’t kneel very well but you can get them into position and then sticky wax them onto the relevant bit of floor, if you are a scene director.  Personally I don’t pose the dolls in a house and glue them there because I still think they have doll lives and get on with them the moment the front of the house is closed.

But then as I’m the person who just made a lion and a dragon like this, I would, wouldn’t I? 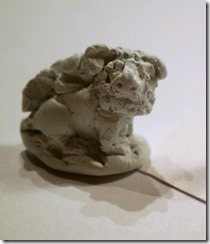 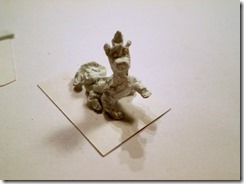 This entry was posted in 24th scale and tagged more sculpting with Milliput. Bookmark the permalink.