At the end of the last blog I asked you to guess what this is.

It’s tricky to tell in the Milliput so I put some aids to guessing beside it. 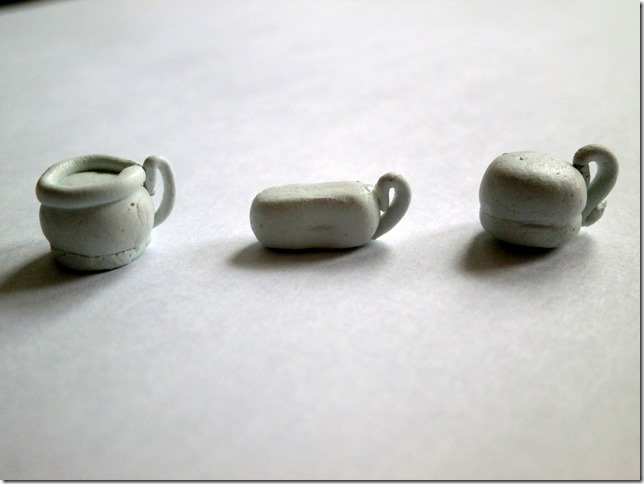 It is a bordaloue.  That is a potty specifically designed for a lady, and a very ergonomic thing that is.  I’ve never seen a dolls’ house one in any scale but they were common from the eighteenth century until the late nineteenth and evolved to cope with the problems of gigantic, unwashable silk dresses and the calls of nature.

The name is thought to be in honour of Louis Bordaloue, a seventeenth century French priest, who was famous for giving very lengthy sermons.  There is also a possibility that the use of the name was the English having a go at the French, in the traditional manner.  Whatever the reason for the preacher’s name landing in the lav, it stuck.  There is a thought that these items were well sized to be carried in a hand muff, though I shouldn’t fancy ice skating while carrying a full one.  Many examples came with covers, which must have been handy, and I now wonder whether the vicar waits at the church door after the service to make sure you’re not emptying anything on the gravestones on the way out.

Living in Historic Warwick is also handy.  I found a nice bordaloue in the antiques market.  They were reluctant to let me handle it and I had to photograph it on a shelf, if you can read the price ticket you can see why, perhaps there are not many survivors, though there are (possibly) apocryphal stories of them turning up on dinner tables at much later dates being used as sauce boats. 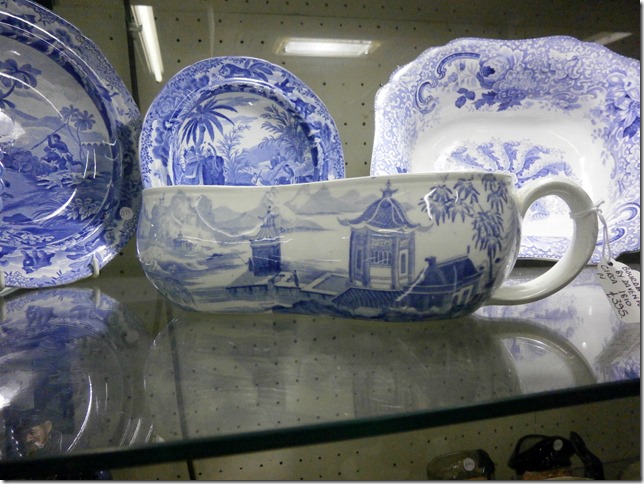 This example is made by Davenport, a firm in the Potteries working from 1793 to 1887.  Here’s the other side

Isn’t it pretty?  As you can see it is transfer decorated in a Chinoiserie style.  In common with many types of such receptacle it even has a picture on the inside, so you have something to look at while you’re waiting for inspiration.

Perhaps lovers of the Willow pattern can imagine they are filling the stream on which floats the boat.  As you might also notice, whilst there is a handle it is also a shape that can be grasped between the thighs so you have both hands free to search for

If you search online for bordaloue you will find a variety of decorations. These items would presumably be bought by their lady users, wooed as always by something pretty.  You will find few that are undecorated and some that are fancier, even gilded.

For the miniature version, I’ll have to simplify the painting but I think I might stay with blue and white Chinoiserie, always a popular Potteries choice from the eighteenth century onwards.  Were there at the same time Chinese potteries doing ‘Englishery’?  You may well ask.  The answer in a limited way is yes, some oriental potters made dinner services to order with British heraldic devices emblazoned upon them, for export to Britain.

As enterprising, you may think, as the ladies who took receptacles along to the Reverend Bordaloue’s lengthy lectures, in case they went a little potty sitting there listening all morning.

I have finished all the 24th scale sculpting for moulds now.

When the bordaloues are ready I’ll put them on the bog or you can give me a tinkle.

No, I’m sorry, you’ll have to make up jokes from  your own stream of conscience from here on (it’s not as though you haven’t anything to go on).  Penny for your thoughts?

This entry was posted in 24th scale and tagged the bordaloue. Bookmark the permalink.